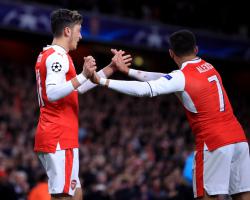 The value of both Ozil and Sanchez to the North Londoners was evident in the Champions League win over Ludogorets on Wednesday as the former netted a hat-trick while the latter scored with a sumptuous lifted finish.

Both players are contracted until 2018 and Arsenal fans are eager to see the duo extend their stays having witnessed previous star players such as Ashley Cole, Samir Nasri and Robin van Persie move on rather than agree new terms.

The adherence to one of the league's more balanced wage bills has proved a sticking point for the Gunners' finest talent in the past, yet Seaman insists Ozil and Sanchez deserve to be paid handsomely.

Asked if they would need to break their wage structure to keep the pair, Seaman replied: "They will have to

If that's the top wages at Arsenal then so be it.

"If everyone's getting little rises here and there then it's okay

I'm not a manager but you've got to juggle that.

"I remember when I was playing, I was near the top, and it's a juggling thing

Seaman spent over a decade at Arsenal, winning two doubles with them, and his achievements were celebrated when he was inducted into the National Football Museum's Hall of Fame in Manchester on Wednesday night.

It is 13 seasons since the Gunners last lifted the Premier League title, though Seaman is hopeful that their purchases in the summer transfer market can end the run.

"They've made good signings," he added.

"I know a lot of people were like, 'Oh, they made them late' but it doesn't matter

You are buying players to fit into your team and that's what has happened - you look at (Granit) Xhaka, (Shkodran) Mustafi, they've fitted in really well.

"There's a couple of others that are taking their time but it's their first season in the Premier League and it's not easy to adapt.

"If you look at the way they're playing, they're doing well

But they've done well in this part of the season before, it's when you get to the last quarter of the season when it coincides with the Champions League knock-out stages.

We need to get rid of that, make sure we're ready for that if it happens and then we kick on from there

We've got a good chance this season."