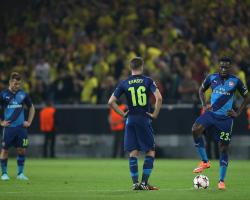 Ciro Immobile and Pierre-Emerick Aubameyang struck either side of half-time but the German club would have won by a landslide if it were not for the reflexes of Wojciech Szczesny and their own wastefulness.

Arsenal's defending was woeful and reached its nadir for Immobile's opener, but Wenger admitted they had under-performed across the pitch.

"We lost the ball at the throw in but it was still three against Immobile at the back," Wenger said.

"It's still difficult to understand how we concede the goal

There were still enough people to stop the goal.

"Dortmund were very strong in midfield

They were stronger than us in midfield.

"But it's very difficult on the night to go into any individual assessment of any player because as a team we were not at the requested level.

"It was a difficult night

Dortmund were the better team

Our performance was disappointing."

This time Roman Weidenfeller was the beneficiary of his wayward finishing and crucially the chance came four minutes before Immobile's opener.

Welbeck's record in front of goal has been criticised, but Wenger claimed his ÃÂ£16million deadline-day signing from Manchester United needs time to settle.

"The paradox of the night is that we had very good chances to score first, but they then scored from counter-attacks," Wenger said.

"Danny will improve, I don't think we have to make a problem of that.

"He had a very lively first-half

He had two or three good chances but couldn't finish them

There was one obvious one

We have to be patient with him."

To complete a dispiriting night that has opened Arsenal's transfer policy and Wenger's team selection open to criticism, Jack Wilshere limped off with an ankle problem.

"Wilshere has turned his ankle

It's difficult to say how bad it is because I'm being cautious," Wenger said.

"Normally it's not very bad but because of his history (with ankle injuries) I'm being cautious."

Dortmund had 22 shots on target while Arsenal could muster only four in a defeat far more emphatic than suggested by the scoreline.

"We had a couple of other possibilities to score, but there were the great reactions of Wojciech Szczesny," Dortmund boss Jurgen Klopp said.

"The result of 2-0 was perfect for us because we were playing very strong opponents.

"We wanted to be a pressing and counter-pressing machine and get the ball whenever possible.

"When we get the ball we play very quickly and that's hard to defend against.

"We didn't let Arsenal impose their game and this only happens when you run a lot."