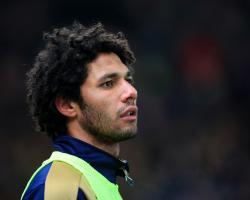 Although Elneny is not quite there yet, he certainly proved that his future at Arsenal will be a bright one.

Playing the full 90-minutes, ElnenyÃâs dÃÂ©but was full of energy, desire, and determination

The 23-year old showed enough to suggest that he will be able to secure a role in Arsene WengerÃâs season.

Although his enthusiasm held him back on a few occasions, leaving him out of position several times while in pursuit of the ball.

Elneny had made a name for himself at Basel as a defensive midfielder but he added more forward-thinking elements over the first half of the season, which led Wenger to trust that Elneny can play in a box-to-box role.

ÃâI think he was surprised by the intensity of the game, by the challenges,Ãâ Wenger said

ÃâAt the start, the players are surprised as well by how much the referee lets go

In England, you hear the referee say a lot: ÃâGet on with it.Ãâ In other countries, he would whistle.Ãâ

Will he be a regular starter? Probably not

However, Elneny is off to a promising start.