Everton put a dent in Arsenal's top four aspirations with a hard-fought 1-0 victory at Goodison Park on Sunday afternoon.

Everton started the game brightly and took an early lead, courtesy of Phil Jagielka. The veteran centre-back - who was only in the starting XI after Michael Keane was taken ill during the warm-up - took advantage of some confusion in the Arsenal box after a long throw and was able to prod the ball home from close range. Arsenal made a double change during the interval in an attempt to swing the game back in their favour, but they found it difficult to break down a resolute Everton defence.

Marco Silva's debut season with ​Everton certainly hasn't been plain sailing, but things are starting to look a little brighter after the Toffees secured back-to-back victories against Chelsea and West Ham. 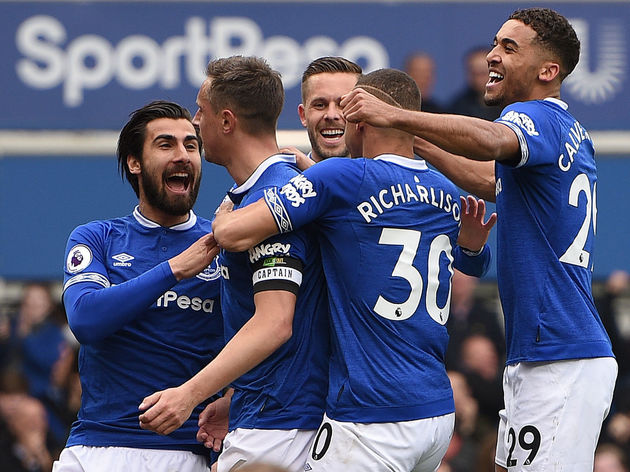 They picked up where they left off against West Ham in this one and started superbly, piling unrelenting pressure on the Arsenal back line - that pressure ultimately telling when Jagielka found the opening goal after just ten minutes. They may have been tempted to sit back on their lead but, to their credit, they remained on the offensive and deservedly reaped the rewards.

If they can continue to play in the same manner until the end of the season then they will put themselves in a fantastic position to finish in seventh, which appeared to be highly unlikely just a few months ago.

If Everton aren't able to secure a permanent deal for ​Barcelona loanee Andre Gomes this summer, then they will be missing out on an incredibly talented midfielder who appears to have fully adapted to life in the Premier League.

The Portuguese midfielder appeared untouchable at times, gracefully striding through the Arsenal midfield with remarkable ease. His decision-making and weight of pass was routinely excellent and, without him in the side, Everton may not have been able to take control of the game.

Whisper it quietly, but Gomes far better than anything in the #Arsenal midfield

Andre Gomes should not be worth less than 50 million imo, what a game he's having against Arsenal

The race for the top four is now wide open and, as ​Arsenal were unbeaten in the league since the start of February, they were starting to look like strong contenders to make a return to the Champions League. However, they were well off the pace in this one were outplayed all over the park by the hosts, particularly in the first half. Unai Emery didn't hesitate to tinker with the shape of his side at half-time, bringing on Aaron Ramsey and Pierre-Emerick Aubameyang, but those substitutions failed to have the desired effect as Everton continued to cause problems.

It's a disappointing result of course, but Arsenal will have to move on quickly and prepare themselves for a huge clash against ​Napoli. Given how poor they've been away from home this season, getting a good result at the Emirates is essential.

No one particularly stood out from an Arsenal perspective, but Leno deserves some credit for a tidy performance in between the sticks.

The German keeper made a string of decent saves in the second half to keep the Gunners in contention and, without him, the game could have easily drifted away. He also looks to have refined his ability to command his box, which had previously undermined his early performances after taking the number one spot away from Petr Cech.

Leno superb again today. Would be 5-0 down without him.

Leno player of the month again you say

Everton travel to face the already relegated Fulham at Craven Cottage next Saturday, whilst Arsenal are set to welcome Napoli in the first leg of their Europa League quarter-final clash on Thursday.