Every Premier League team has more than a few stories of failed transfers and disappointing players, but sometimes a player is so bad that they leave their own club's fans screaming in anger.

It usually takes more than a few underwhelming appearances to attract those kinds of feelings. Often, that hatred is reserved for players who mistreat the club or the supporters, and fans never forget things like that.

Here's a look at every Premier League side's most hated former player. For years, this spot was reserved for Ashley Cole, whose transfer to Chelsea in 2006 left more than just a bad taste in ​Arsenal's mouth. However, nobody deserves this honour more than Emmanuel Adebayor.

He loved flirting with other teams and then pretending he didn't, but his fate was confirmed when he sprinted the entire length of the Etihad Stadium to celebrate in front of the Arsenal fans in 2009. Everyone else loved it, but Gooners will never forget the disrespect. Having penned a big contract with ​Aston Villa in 2015, Joleon Lescott was quickly accused of taking one last pay day without really caring about the team. His performances were poor, but there was none worse than a 6-0 defeat to Liverpool in February. After that, the fun started.

Almost immediately after the final whistle, Lescott tweeted a picture of a luxury car (something he claimed happened accidentally), and he then went on to confess (via ​BBC Sport) that relegation was 'a weight off the shoulders'. If he wanted fans to think he didn't care, he definitely succeeded. It's tough to find a player hated by the ​Bournemouth fans. They're one of the purest clubs around. However, if you're looking for one player who is remembered poorly, it has to be Marcos Painter.

After joining on loan in February 2013, Painter made just two appearances for Bournemouth, but that was enough for many fans to label him as the worst player to ever represent the club. The left-back was completely out of his depth, and fans haven't forgotten. On the pitch, Leon Knight was pretty reliable for ​Brighton. Unfortunately, when he wasn't scoring goals, he had a habit of rubbing people the wrong way.

In early 2005, Knight showed his frustration by flinging a black armband - a mark of respect for the recently deceased father of a teammate - to the ground. Brighton fans weren't impressed and let their feelings be known, which prompted Knight to raise his middle finger to the crowd.

One year later, he got himself kicked off a team bus for fighting with manager Mark McGhee, and he was out the club soon after. ​Burnley's list of hated players isn't very deep. Instead, a lot of that hatred is directed towards a former manager, Owen Coyle - the man who led Burnley to the Premier League in the first place.

Coyle jumped ship to local rivals Bolton in the 2009/10 season, insisting that they had better resources and a brighter future than Burnley. Fans began calling Coyle 'Judas', holding up banners and even flying a banner over Turf Moor to express their disgust. For younger fans, the answer here is probably Thibaut Courtois, who threw a hissy fit to force through a switch to ​Real Madrid in 2018​. However, Winston Bogarde's four-year spell at the club between 2000 and 2004 still gets fans riled up to this day.

The Dutchman penned a big contract but fell out of favour after just a few weeks. ​Chelsea wanted to sell but Bogarde was having none of it, publicly insisting he would rather take the money and rot away in the reserves than leave for a new team. And that's exactly what happened. A Millwall fan joining ​Crystal Palace was never going to go down well, and that's the sort of atmosphere Neil Ruddock was greeted by in 2000.

Fans were always on Ruddock's back about his attitude, and manager Alan Smith even told him (via​ Sky Sports) to grow up and start setting a good example for young players. That didn't happen, with Ruddock shown red cards for abusing referees and kicking out at players. Any ​Everton player who joins Liverpool is going to be up there in the Goodison Park pantheon of hate, but Nick Barmby still managed to make himself the clear winner. He rejected a new contract and made no secret of how his dream was to continue his career on the red half of Merseyside.

Everton's anger towards Barmby came because of the fact that there was no reason for him to want to leave. He was a star player who was popular both inside and outside the dressing room, and a new contract was there for him to sign. However, Barmby simply decided that he wanted to play for Liverpool. Uh oh.​ Chelsea​ fans have fond memories of Dennis Wise, but the same cannot be said of ​Leicester City supporters.

Wise's time at the club was short, but he still managed to get himself sent home from a pre-season tour after breaking teammate Callum Davidson's nose during an argument. Leicester tore up his contract over the incident, prompting Wise to take his former employers to court in search of reinstatement. Leicester won the case eventually, but the damage was already done. 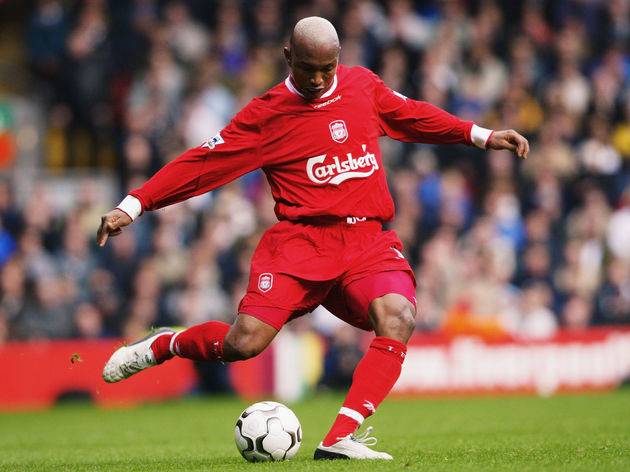 Touted as the man who could fire ​Liverpool to ​Premier League glory in 2002, El Hadji Diouf did nothing but make the Reds miserable. On the pitch, his lack of goals were enough to frustrate supporters alone, but Diouf's attitude made things infinitely worse.

He made a habit of spitting at people and regularly butted heads with Steven Gerrard, who felt Diouf didn't care about the club whatsoever. When it came to choosing sides - Gerrard or Diouf - Liverpool fans didn't need to spend long deciding. Between 2004 and 2009, Danny Mills was an underwhelming, injury-plagued right-back who failed to make any real impact with ​Manchester City. Fans weren't too frustrated with that, but his work as a pundit has made things so much worse.

You never have to work too hard to find Mills criticising City - especially before their emergence as one of Europe's elite sides - and City fans aren't happy with that. The belief is that Mills took a pay cheque, did very little on the pitch and now spends his time bashing the club. Charming.​ Carlos Tevez became a popular player while on loan at Old Trafford between 2007 and 2009. ​Manchester United triggered their option to sign him permanently and offered him a contract which would have made him one of the club's top earners, but that wasn't enough for the Argentine.

After complaining about a perceived lack of game time (despite playing more than Wayne Rooney and Dimitar Berbatov), Tevez committed the ultimate sin and swapped United for the riches of Manchester City, and he has never been forgiven. ​Newcastle broke their transfer record to sign Michael Owen from Real Madrid in 2005, and they thought he would be the man to fire them back towards the top of the table. Unfortunately, things went about as badly as they could have gone.

The expensive signing was poor on the pitch and regularly sidelined through injury, but it was his performances in the 2008/09 season which angered fans most. The club were in a relegation battle and Owen was accused of giving up hope and simply waiting until he could leave at the end of the season.

He later confessed (via ​BBC Sport) that he regretted joining the club, and to make matters worse, he even ended up fighting Alan Shearer on Twitter. In the 2000/01 season, Andy Marshall was a ​Norwich City hero. The goalkeeper was voted the Player of the Season after saving the Canaries from relegation, but then things took a turn quickly.

He refused to sign a new contract to force through a move to a Premier League side, and eventually joined arch rivals ​Ipswich Town. Norwich weren't happy, and things got even worse when Marshall celebrated wildly after keeping a clean sheet against the Canaries a few years later. The bridge was well and truly burned.​

Dean Hammond will not be returning to the Blades… https://t.co/sRUh6DnL6d #twitterblades pic.twitter.com/PeKpIHxRn0

Having spent the last few years in the higher divisions, Dean Hammond delighted ​Sheffield United fans when he dropped down to League One to join the club on loan in 2015. He was supposed to be a star, but he performed like anything but.

Fans wanted to see the back of him, and the recently arrived Chris Wilder wanted him out as well, but Hammond didn't care and activated an option in his loan deal which saw him join the club permanently.​ Fortunately, the Blades managed reach a settlement to get rid of him a few weeks later, so the suffering didn't last too long. Once a ​Tottenham Hotspur icon, former centre-back Sol Campbell threw it all away by joining Arsenal in 2001. However, it wasn't just the fact that he joined ​their rivals which angered fans, but the manner in which he did it.

With his contract expiring, he regularly insisted he was going to stay with Spurs, who offered him a new deal which would have made Campbell their highest-ever earner. He then pulled a U-turn and joined Arsenal - a team who he had previously insisted he would never even dream about joining. Lee Cook joined ​Watford as a youngster in 1999 and made his debut in 2001, but injury struggles took their toll. To help him recover, Watford loaned Cook to rivals ​Queens Park Rangers in 2002, and that proved to be the beginning of the end.

By the time he returned, Cook was accused of having his head turned by QPR (who he admitted he had always supported) and he chose to run his contract down to seal a return to the Rs in 2004 - prompting a furious response from Watford fans when the two sides faced off. ​West Ham fans have been left feeling betrayed on a number of occasions. Frank Lampard, Jermain Defoe and Dimitri Payet have all played their way into the Hammers' bad books, but there's a special place in West Ham infamy saved for Paul Ince.

Ince was a boyhood West Ham fan who came through the club's academy, but relegation in the 1988/89 season saw things turn sour. He played just once the following season before leaving for Manchester United, but not after being pictured in a United shirt before the move went through. The 'Judas' label was thrown around, and son Tom Ince still attracts plenty of criticism whenever he faces the Hammers as a result. ​Wolves fans actually loved striker Henri Camara to begin with. He scored a fair few goals and won the 2003/04 Player of the Season award, but quickly questioned his future after the team was relegated that season.

Camara refused to return for pre-season training and effectively went on strike to force through a move to Celtic, where he wanted to fill the void left by Henrik Larsson (which did not go to plan). When that failed, he insisted he didn't want to return to Wolves and waste his time in the ​Championship, and fans have never forgotten that.