Fabianski signs off in style 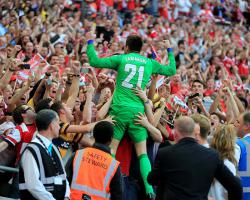 The Poland goalkeeper has spent much of his time since arriving from Legia Warsaw in 2007 watching from the sidelines.

Fabianski, now 29, has understandably grown frustrated at playing second fiddle and is set to leave at the end of his contract this summer, having rejected offers of an extension.

The last of his 78 matches for the Gunners came on Saturday, when Arsene Wenger plumped for the FA Cup ever-present instead of regular number one Wojciech Szczesny at Wembley.

It was a decision the Frenchman may well have been cursing as Hull scored twice early on in the FA Cup final, although it was all smiles in the end as Aaron Ramsey struck in stoppage time to secure a 3-2 extra-time win and end Arsenal's nine-year trophy drought.

"I don't know how best to express my emotions but it feels amazing.

"It was probably my last game for Arsenal

I don't know what I can say, but if I end my Arsenal career in that way then it is the best way to finish.

"It is a massive relief because it has been a long time without a trophy, especially after that kind of game when we were 2-0 down in the cup final.

"No one was expecting us to be two goals down after 10 minutes and to produce that great comeback I think was a massive, massive relief.

"Hopefully the club can now kick on

I think this gives us or gives Arsenal the idea that those players can win trophies, that they are able to."

Fabianksi may be joined by right-back Bacary Sagna in leaving the club this summer, although unlike the goalkeeper the France right-back was unwilling to speak after the final.

However, even with those potential departures Wenger will be hopeful that Arsenal's first silverware since the 2005 FA Cup can act as a catalyst to further success.

Lukas Podolski did not have his greatest game in Saturday's triumph but has been a key member of the squad this season and knows just how important the victory against Hull was.

"You win nothing for nine years so it is special for us," the Germany international said

"We have to come and celebrate now.

"For the fans, for the club, it is something special

"It is a lot of pressure but in the end it is a cup game and, in the end, it can happen

We were 2-0 down and came back, it was a great match and we had the cup in our hands.

"We have a great spirit in the team

Everybody is a part of this and you see in the last matches we did well, getting fourth place and now winning the FA Cup.

"It was a special cup game because Hull fought great and played great but in the end we have it."