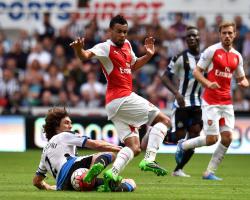 The Serbia international, who has now picked up two bookings and a sending-off in his first five appearances for the club, received a straight red card from referee Andre Marriner after catching Francis Coquelin with an over-the-ball challenge in front of a crowd of 50,388 at St James' Park.

Arsenal, who had already started the better, dominated the game from then on, although it took a deflection off Coloccini to steer Alex Oxlade-Chamberlain's 52nd-minute effort in off the post to claim the points.

Arsene Wenger's defensive problems eased slightly before kick-off when he was able to name Laurent Koscielny in his starting line-up following his recovery from a back injury, while he preferred Theo Walcott to Olivier Giroud in attack.

Opposite number Steve McClaren restored the bulk of the men rested for the midweek cup-tie against Northampton with the inclusion of Daryl Janmaat and Florian Thauvin the only changes to the side which started the 0-0 league draw at Manchester United.

But his game-plan was ripped apart within 16 minutes when referee Marriner interpreted Mitrovic's challenge on Coquelin as a red card offence and dismissed him, much to the Serbian's astonishment and the horror of his team-mates.

The official's standing on Tyneside plummeted further when, having already booked Moussa Sissoko for a foul on Nacho Monreal, he swiftly added Chancel Mbemba and Thauvin to his collection, although none of them could have any real complaint.

However, he might have angered the locals further had he spotted Thauvin's 13th-minute trip on Hector Bellerin inside the box.

Most of what football there was before the break was played by the Gunners, although Newcastle's commendable organisation kept them in a game in which they were on the back foot from the off.

Keeper Tim Krul had to come smartly from his line to block Walcott's shot from Bellerin's volleyed ninth-minute cross, and the Dutchman was relieved to see the England striker fire wastefully wide of the target after he could only parry Alexis Sanchez's drive 13 minutes before the break.

But the Holland international was finally beaten seven minutes after the restart when, after Santi Cazorla's initial effort had been blocked, he palmed away Aaron Ramsey's follow-up only to see Oxlade-Chamberlain rifle home with the help of a deflection off Coloccini and the inside of the far post.

Krul enjoyed better fortune when he pushed away Sanchez's 58th-minute strike from close-range and then claimed Cazorla's snapshot at the second attempt.

The Magpies repeatedly tried to hit the visitors on the break with midfielder Thauvin attempting to lead the line, but they found themselves largely camped deep inside their own half and Krul had to deny substitute Giroud, Cazorla and Monreal before his day was done.

"Yes this boring game has now opened up

Just what it needed now it should open up and we can try and pick them off." - Golfer and Arsenal fan Ian Poulter was not impressed with the match before Coloccini's own goal.

Alexis Sanchez's invention proved crucial in keeping Newcastle on the back foot, and he was a threat throughout.

Mitrovic's early departure proved to be the key moment in the game as a team already struggling to contain the Gunners found itself facing an even steeper uphill task.

Steve McClaren was left to contemplate how he is going to keep Mitrovic out of trouble.

Mitrovic gave referee Andre Marriner the opportunity to send him off with a rash, rather than malicious, challenge having already established a reputation he could do without in English football

Newcastle manager McClaren did not think the red card shown to Mitrovic was deserved.

It was more clumsy, he had his eye on the ball and kind of stood on his foot," McClaren told BT Sport 1.

I just felt, I don't want to criticise, that early on there were too many yellows and it was kind of a rod for his (Marriner's) own back and he had to keep producing them

We're not disputing there were fouls.

They were magnificent in terms of that and what a fantastic crowd."

Arsenal boss Wenger, meanwhile, admitted the Gunners had been a little too cautious but he was pleased with the victory

"We were mature and intelligent and we played a little bit cautious but at the end of the day we won the game," the Frenchman said.

When asked if the match had been a physical encounter, Wenger added: " Very much

We toughened the game up and decided from the start to make it very committed and physical, and we had problems to cope with but kept our nerve."

He was, however, keeping his counsel over any potential transfer dealings before the window closes

"We are out there and working on it and I'm optimistic," Wenger said

"This kind of thing is very difficult to predict."