Fans to march over ticket prices 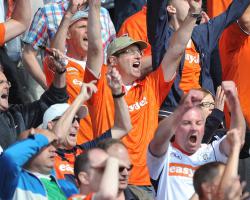 The national fans' group and supporters believe that clubs should use the multi-billion pound media deals to lower ticket prices for both home and away fans.

The Premier League's current media deal is worth ÃÂ£5.5billion.

There's always the odd deal that clubs can quote to play it down, but the truth is supporters tell us they think tickets cost too much

"It's not just top-flight football either, fans throughout the leagues tell us prices are too high

"Football is swimming in money, with clubs pocketing record amounts from broadcasting deals while squeezing supporters with high prices

Something has to give.

"Ultimately we, as football supporters, have to speak up about this."

The march will leave London's Marble Arch at 1pm before heading to the Premier League and Football League offices.