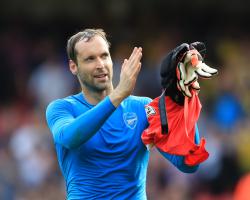 An early penalty from Santi Cazorla, plus an Alexis Sanchez tap-in and a Mesut Ozil header saw the visitors blow Watford away in the opening 45 minutes at Vicarage Road on Saturday.

The Hornets hit back after the break with club-record signing Roberto Pereyra coming off the bench to score a debut consolation strike as Arsenal held on to win 3-1.

The victory follows an opening weekend defeat at home to Liverpool and a goalless draw at champions Leicester last time out.

But Arsenal looked sharper this time around and, with the signings of Shkodran Mustafi and Lucas Perez imminent, they are in better shape heading into the international break.

Asked if Arsenal's season was now under way, Cech replied: "In the first half certainly because we did so well.

"We scored three goals and we should have scored more goals

They are a good Premier League side so they pushed for something to happen.

"In the end, the second half was tougher

They played well and changed their formation and put us under more pressure.

Unfortunately they managed to score a goal and the game then became more lively."

Just one point from their first two games had seen a small minority of fans already turn on manager Arsene Wenger, while in the stalemate at Leicester they called on the club to spend money in the transfer market.

With the deals to sign Valencia defender Mustafi and Perez of Deportivo La Coruna all but complete after they underwent medicals on Friday, plus the better performance on the pitch, the travelling contingent seemed much happier.

And Cech, who won the Premier League four times during his time across London at Chelsea, knows it is a marathon and not a sprint as Arsenal look for their first title since 2004.

"Like everybody else, we are going to fight to win every game to be in the mix until the last kick

We know we are not an exception.

There is no hiding from that

Everybody else will do the same, so we will try to do our best."

Watford meanwhile have now lost three out of four games in all competitions after opening their season with an impressive 1-1 draw at Southampton.

Manager Walter Mazzarri is yet to taste victory since his appointment in the summer but he was able to give debuts to Pereyra, Daryl Jaanmat, Younes Kaboul and Isaac Success.

Like Cech, Watford captain Troy Deeney knows it is early days and believes there is more to come from a side still developing under Mazzarri.

"We live to fight another day," he said.

"We are a new team gelling again, these first four or five games won't define our season

The window closing on Wednesday will help us (settle).

"Defensively we are just getting minor details wrong at the moment

We can take a lot of positives from the second half though.

"Our season will be defined by beating the teams around us

I believe in hard work and that will get us results."