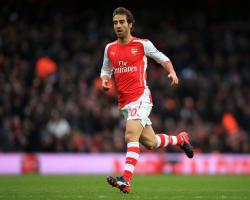 Coquelin has been a revelation for the Gunners this season, since returning from the obscurity of a loan spell at Sky Bet Championship side Charlton.

The 24-year-old has proven himself to be the disruptive and tidy defensive midfielder Arsene Wenger has needed, limiting the chances of his 31-year-old fellow Frenchman.

Flamini has not started since the FA Cup fifth-round defeat of Middlesbrough but can have no objections as the Gunners recorded 10 wins in 11 matches, only dropping points in a draw with Barclays Premier League champions Chelsea.

"If you look at the stats we nearly won every single game since February," Flamini said.

"It's a situation I accept

Competition makes you better, but there's not much to say when the team is winning every single game.

"You just have to accept it and it's part of the game.

Now he has been doing very well since he played for the team.

"I'm not surprised because we have the chance to play with him every day, but I'm really pleased with him."

Flamini is in his second spell at Arsenal and has a year remaining on his contract.

"I'm happy to be part of this club," Flamini added.

That, for me, is the most important.

"I don't think the personal situation of every player is important

I think the collective is more important, especially in a situation like that when we're about to play a final of the FA Cup and to add another trophy to the club."

Flamini was at Arsenal when Wenger's men won the FA Cup in 2005 and nine years later when the long trophy drought ended.

He hopes to play a part on Saturday against Villa for a third FA Cup success.

"As a player and an Arsenal player it would be a big honour and I would be very proud," he said.

I wake up every morning because I want to be a winner.

"It will be a possibility to prove it again and to add a trophy to the others I won before."

Arsenal conceded two goals in the opening eight minutes 12 months ago against Hull before rallying and prevailing through Aaron Ramsey's extra-time strike.

Flamini added: "We make sure to learn from our mistakes and not to do it again because we made it very difficult for ourselves last year

We will try to make it more simple and easier."