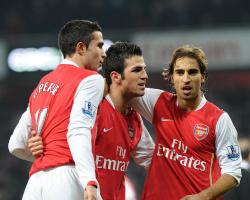 Fabregas, now 27, came of age at Arsenal, having arrived as a raw teenager from Barcelona, before returning to his boyhood club for Â£30million in August 2011.

The Gunners, though, passed up on the opportunity to sign him back earlier in the summer, with the Spain midfielder instead joining Chelsea ahead of the World Cup.

Flamini - who rejoined Arsenal during August 2013 having left for AC Milan in 2008 - was a team-mate of Fabregas for several seasons, including the 2006 Champions League final defeat to Barcelona in Paris.

The pair are now living nearby each other again in north London, but that will not stop 30-year-old Flamini giving his all to limit the impact of his neighbour when the whistle blows on Sunday afternoon.

"We are really close friends

It is a special game for me to play against him," said Flamini.

"I stay in touch with him all the time

We live next to each other.

"He is someone I really appreciate on the pitch, not just because he is a good player, but he is a top guy off the pitch as well.

"Football is our lives, but also we have a life outside the pitch also.

"He shows the right mentality and works for the team

He is certainly going to be one of the (Chelsea) players to be careful about on Sunday."

Flamini added: "When we were together here, we had a great partnership on the pitch

He was more offensive and I was more defensive, working hard for him.

"Now after going to Italy, I have learned a lot tactically and obviously gained experience, so I am trying to play more with my head and more quality."

"Mathieu has matured tactically and is a good friend of Cesc

They were always together, so there is that kind of pride that comes in when two friends play against each other, that will make him keen to stop him," Wenger said.

Wenger insists there should be no hard feelings between Fabregas and the club, despite not deciding to renew their partnership.

"We had bought Ozil for Â£40m the year before, in the same position," he said.

"Fabregas was here once and for all

He decided to leave

When a player of those characteristics decides to leave, you buy somebody else

That is what we did

The Gunners boss added: " If you have Fabregas deep, from where he can give long balls, you need people around him who defend as well - we have Ozil, we have Cazorla, we have Ramsey, we have Wilshere

None of them are defensive midfielders

"If you tell me you add some more who do not defend well, what do you do?"

Wenger accepts Chelsea are "one of the favourites" for the title and "have the best numbers until now".

However, the Arsenal manager added: "Every team has its difficult at some stage during the season, every team."