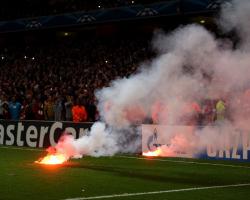 Several flares were thrown on to the Emirates Stadium turf after defender Felipe Melo had performed a two-footed tackle on Alexis Sanchez in the 36th minute.

The game was briefly disrupted as Galatasaray captain Wesley Sneijder sought to diffuse the tension by jogging over to the visiting support and appealing for calm.

Goalkeeper Fernando Muslera collected the flares and dropped them on the sidelines, at which point helmeted riot police and stewards filed along the advertising hoardings.

Firecrackers had also been let off by Galatasaray's travelling contingent, who were stunned into silence when Alexis Sanchez fired the Gunners into a 3-0 lead with four minutes of the half remaining.

Two of the arrests were for entering the ground with flares.

"We are aware of a number of flares being ignited and thrown on to the pitch at the Emirates Stadium," a police spokesperson told Press Association Sport.

"There were also some flares thrown near to the Tollington Arms on Hornsey Road.

"Police will be reviewing CCTV footage from inside the stadium and of the surrounding streets."