Giroud nominated for PFA Fans' Player of the Month 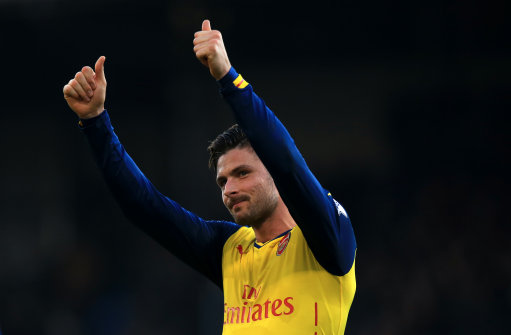 The Gunners are currently third in the Premier League after back to back 2-1 victories over Leicester and Crystal Palace respectively.

Giroud played the full 90 minutes and set up the first goal for Mesut Ozil in Arsenal’s 2-1 defeat to Tottenham at the start of the month.

He then followed this up with a goal in Arsenal’s 2-1 win away at Crystal Palace at the weekend scoring the decisive second goal.

Arsenal have taken six points out of nine so far in February and entertain Everton at home this weekend.

Fans can vote for their favourite player to win by going to the following link http://fanawards.90min.com/

The PFA Fans’ Player of the Month award which is powered by 90min is designed to give a strong voice to the supporters who are the lifeblood of the game. The awards are endorsed by the players and supported by the clubs.

Each month, one lucky fan will meet and present the award to the player on the side of the pitch before the game.

Voting closes at midnight on Saturday 28th February with the winner to be announced on Monday 2nd March.