Giroud out for rest of the year 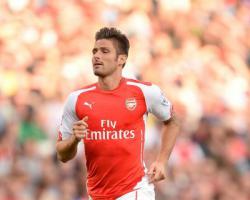 The France international suffered a small fracture near his ankle in the final seconds of Arsenal's 2-2 draw against Everton on Saturday after the ball smashed into the sole of his boot, forcing his foot towards his shin.

Following Arsenal's 1-0 win over Besiktas at the Emirates Stadium on Wednesday, which sees them qualify for the Champions League groups stages, Wenger told Sky Sports 5: " The news is that he had surgery today and the surgery went well but he will be out, maybe to be competitive at the top, top level, until the end of December, beginning of January."

Despite losing Giroud for up to four months, Wenger has ruled out panic-buying a replacement, instead choosing to hail Arsenal's quality up front.

"We will try to look around but we want quality and we have quality," the Frenchman said.

"We have fortunately (Theo) Walcott coming back soon, I believe (Yaya) Sanogo will have an impact

We have (Lukas) Podolski, and (Joel) Campbell who can play centre forward so to find players that are better than the players we have will be difficult.

After the first of September you still have to live with it."

"Podolski can play there and Campbell if you ask what he is, he's a striker

They are players of quality and we will see."