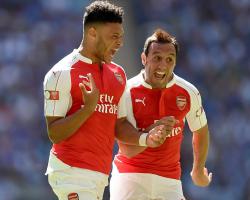 The veteran French coach had not beaten his rival in 13 previous attempts, which the Portuguese suggested should be an ongoing cause for concern.

However, that unwanted statistic was put to bed following a confident display from the FA Cup winners, who may well prove to be serious challengers to Chelsea's hopes of retaining the Barclays Premier League title.

Goalkeeper Petr Cech lined up against his old club following a ÃÂ£10million summer move across London, while Theo Walcott, who has just signed a lucrative new deal, led the Arsenal attack.

England midfielder Jack Wilshere missed out, presumably as a precaution against injury.

Chelsea started with Radamel Falcao on the bench, the Colombian loaned from Monaco after an indifferent season at Manchester United.

The league champions were lively early on but on 22 minutes Mesut Ozil whipped in a free-kick from the left which Walcott flicked back goalwards, but the ball dropped straight into the arms of Blues goalkeeper Thibaut Courtois.

Two minutes later Oxlade-Chamberlain had fired the Gunners ahead

Ozil played the ball across to Walcott in space, who in turn fed Oxlade-Chamblerlain on the overlap down the right

It was Arsenal's first goal against Chelsea since January 2013.

The Blues were soon looking to reassert their authority though as Ramires curled an effort just wide from outside the penalty area before somehow heading over Loic Remy's cross when arriving at pace in the six-yard box.

As half-time approached, Oxlade-Chamberlain got away down the right again, this time his floated ball back across goal was headed away by Branislav Ivanovic just as Nacho Monreal set himself to score.

Mourinho made a change for the second half when Remy was replaced by Falcao and soon afterwards sent Oscar into the action, for Ramires.

Arsenal, though, remained an effective defensive unit, something which had been lacking in recent meetings with the Blues.

On the hour, Chelsea midfielder Eden Hazard broke into the right side of the penalty area

However, the Belgian, last season voted Footballer of the Year by football writers and his fellow players, blasted the ball high over Cech's goal.

Arsenal made another change with 13 minutes left when Oxlade-Chamberlain was substituted for captain Mikel Arteta, whose last appearance before injury problems was in November

Arsenal almost made it 2-0 in the closing stages when Santi Cazorla's chip-shot was saved by Courtois, and Aaron Ramsey's follow-up was blocked.

Tempers threatened to flare up after substitute Kieran Gibbs fouled Nemanja Matic as Arsenal closed out a morale-boosting win, with Gibbs denied in stoppage time by another good block from the Chelsea keeper.

The Czech Republic goalkeeper kept his former team-mates at bay, organised his own defence and saved well when called upon, notably from Oscar's free-kick

One flap at a corner aside it was a strong display.

Alex Oxlade-Chamberlain: The England midfielder was found by Walcott with a cross-field pass, made space in the right side of Chelsea's box and rifled a left-footed shot across goal into the top corner.

Now the score between the pair is 13-1

It will give Arsenal confidence for the battles ahead, while Mourinho is sure to play down the relevance of a glamorised pre-season friendly on the forthcoming title race.

Mourinho has spoken of his delight at his striking options, but Diego Costa was injured, Loic Remy often offside and Radamel Falcao is still finding his feet

When Ramires spurned a headed equaliser, the Portuguese was seen slapping his forehead in disgust

The game would have been much better for another goal.

Wenger told BT Sport: "It's good because in pre-season we were very solid defensively, so it's a good base to go into the championship.

"Pre-season has gone quite well

We have good spirit and I believe we look dangerous."

Mourinho said: " I think we were the best team

We had more initiative and controlled the game by having good ball possession, but we know when a team is behind the energy and intensity to turn results is more difficult.

"Arsenal defended with 10 men behind the ball, with very good organisation, so congratulations to them."