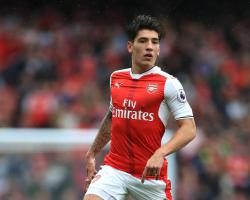 The 21-year-old has been linked with both Manchester City and former club Barcelona in recent weeks following an impressive start to the season.

The right-back came through the ranks at Barcelona's fabled La Masia academy before joining the Gunners in 2011 and has since developed into a first-team regular.

He made his senior Spain debut in in a friendly victory over Bosnia is May, with reports surfacing soon after that he is a wanted man.

Bellerin would have crossed paths with Man City boss Pep Guardiola during his time at Barcelona and it is understood the Catalan is a keen admirer of the defender.

But Wenger insists Bellerin will be staying put and is planning to offer him a new deal in a bid to stave off interest.

Asked if he intends to keep hold of the Spaniard, Wenger replied: "Of course

That is why I'm surprised by the speculation.

So we try to extend, certainly, his contract.

"We will try to extend his contract as well, but for me, his long-term future is here."

Wenger praised Bellerin's rapid improvement over recent times after a debut to forget as Arsenal lost 2-0 to Borussia Dortmund in the Champions League in 2014.

"He has been absolutely fantastic," added the Arsenal boss.

"Let's not forget that his first game he had a nightmare when I played him and he was the year before at Watford (on loan) and he didn't play.

"His progress has been absolutely spectacular because he has absolutely top mental strength; I think he loves as well to be here and he has responsibilities already in the dressing room for such a young age, it's something remarkable."

Wenger lost Cesc Fabregas to Barcelona in 2014 after the midfielder made it clear he wanted to return to the club which nurtured him as a young player, but the Frenchman insists that is not the case with Bellerin.

"I think now that you do not necessarily have to play where you were born," he said.

"Modern life is not exactly like that and what is important is that the player meets his needs where he is and his values, and I think he integrated very well the values of our club and he came at a very, very young age of 15-and-a-half, 16 years of age

I think he is a real Arsenal player."

Bellerin is likely to start for Arsenal when they welcome Swansea, under new manager Bob Bradley for the first time, travel to north London on Saturday.

The hosts go into the Premier League clash having won their last five games in all competitions, but Wenger will still be without injured pair Olivier Giroud and Aaron Ramsey.

The duo are lacking fitness after recovering from toe and hamstring injuries respectively, and will not be involved.

Carl Jenkinson will make his comeback from a 10-month lay-off following a serious knee injury when he turns out for the Under-23s when they face Southampton on Friday.

There is further good news for Wenger as Francis Coquelin is available after initial fears his own knee injury suffered against Chelsea would see him ruled out long-term.