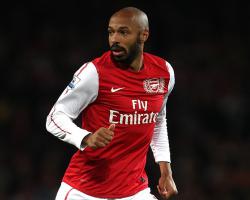 It will not be as a player, after the Frenchman announced his retirement on Tuesday aged 37 and ruled out a second on-field comeback at the Emirates Stadium.

But having lost the 2006 Champions League final with the club, one of the greatest regrets of his career, Henry would love to return to help them right that wrong.

Reflecting on his career in an interview with Sky Sports, Henry said: "I think about the stuff that I missed

How can I forget about the Champions League final?

"Hopefully I can go back in some capacity and finally be part of a team that can lift that trophy.

"That's something I think about

We didn't win the Champions League with Arsenal

With that team that we had, we failed."

Arsenal had goalkeeper Jens Lehmann sent off early in the game against Barcelona in Paris and though Sol Campbell gave them the lead, Samuel Eto'o and Juliano Belletti gave the Spanish side victory.

He said: "I don't have the pretension to know right now if I can be a good coach or not, but the desire is there, we will see

"First and foremost, you want to learn about the game

Because you know the game, it does not mean you can teach it or see the game the same way when you are on the other side, being able to deal with egos, preparing a season, handling a defeat

"I knew how to handle it before, because if I played well in the next game, it was okay, but as a manager, it is not the same thing

"The desire is there, but we will see what is going to come next."

There was speculation Henry may look to continue his playing career at Arsenal, for whom he is the club-record goalscorer

But he said: "You kind of never leave Arsenal Football Club

People want to know about the playing side, but we did not talk too much about that - how many comebacks do you make?

We all love the first Rocky, but then I don't know about the last one.

"I feel I never left Arsenal, although I did

I had one comeback, and I guess that was enough."

After winning the Premier League title twice, including the unbeaten season of 2003/2004, as well as the FA Cup three times, Henry left Arsenal in 2007 and joined Barcelona, where he won the Champions League in 2009 along with two Spanish League titles and the Copa del Rey before moving to the United States.

"I cried when I left Arsenal, I'm not ashamed of saying it," he said.

"When I arrived: Deco

I went there for a reason.

My Barcelona time completed what I was looking for."

Henry, who scored 51 goals in 123 appearances for France, winning the 1998 World Cup and Euro 2000, felt the time was right to hang up his boots

In a statement released to Press Association Sport, Henry said: "After 20 years in the game I have decided to retire from professional football.

"It has been an incredible journey and I would like to thank all the fans, team-mates and individuals involved with AS Monaco, Juventus, Arsenal FC, FC Barcelona, the New York Red Bulls and of course the French national team that have made my time in the game so special.

I will hopefully share some of the insights, observations and experiences I have learnt over the years with you guys.

"I have had some amazing memories (mostly good!) and a wonderful experience.