I dont know if I have Arsenal future - Jack Wilshere 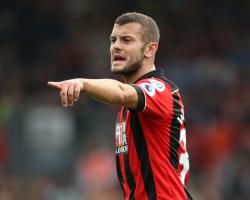 The 24-year-old, who joined the Gunners aged nine, is currently on a season-long loan with Bournemouth as he tries to re-establish himself following a lengthy list of injuries.

Wilshere has pulled on the Arsenal shirt just five times since May 2015 and felt he was falling down the pecking order at the Emirates Stadium.

He is under contract in north London until 2018 but is not certain whether he has a future there.

"I haven't really thought about my future beyond getting a season under my belt and just trying to improve as a player," Wilshere told the Daily Mail

"I genuinely don't know if I am going to end up at Arsenal or somewhere else.

"If you'd asked me two months ago if I was going to finish my career at Arsenal then I would have said, 'Yeah, of course'.

"Two months ago I wouldn't have seen myself being here, but here I am

And I'm enjoying it."

Wilshere is getting what he craves with the Cherries, having started all but one of the eight games he has been there, which is something he felt he would not get at Arsenal.

"There were a lot of midfielders and the manager brought another one in," he added

'I'd been injured for a while, and I was thinking I was at a stage of my career where I needed to play.

"I'm 24 and I've already missed too much football, and, if I want to get to where I want to be, it'd be no good coming off the bench in every game."

Wilshere played more games for England than he did Arsenal last season, but his axe from Sam Allardyce's only squad as manager of the national team forced him to accept his situation.

"It was the final straw," he said

"It hurt not being in there."