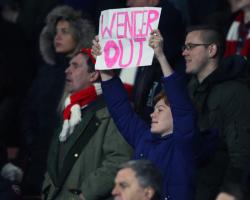 Arsenal conceded five second-half goals to Bayern Munich at the Emirates Stadium to slump to a 5-1 loss in the second leg of their Champions League last-16 tie, going down 10-2 on aggregate

Defeat, sparked when Laurent Koscielny was controversially dismissed in conceding a penalty which led to Bayern's equaliser on the night, followed reports ahead of the match of a training ground bust-up involving star player Alexis Sanchez.

That was denied by Wenger, but Wright said it would take a " cataclysmic effort" for the Frenchman to revitalise his team

Fans protested against the manager, whose contract is up at the end of the season, before and during the match

It just seems to be mounting up

You've got the fans, the protests

He added: "Y ou can't go down to 10 men and not shore it up against a team like Bayern Munich

"We've lost the tie down to 10 men, we maybe should have brought on a couple of defenders and kept it a little bit more respectable

"I think with everything that's going on, in the dressing room, performances, you have to say it will take some monumental effort, some cataclysmic effort for Arsenal to turn it round in respect of the attitude of the players and the drive and determination.

"It seems like something is coming to an end."

The English version of the account tweeted a post which read: " What time is it? Yep, it's ten to!"