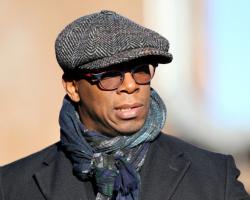 The 67-year-old, who celebrated his 20-year anniversary at the Gunners' helm last October, is out of contract in the summer and has yet to decide where his future lies.

Wright, who played under Wenger from 1996 to 1998, had dinner with his old manager on Thursday night and feels the end could be in sight.

"I was with the boss last night, and if I'm going to be totally honest, I get the impression that that's it," the 53-year-old said on BBC Radio 5 live.

"I was with him for a few hours

He didn't say to me, 'I'm leaving at the end of the season', but I get the impression, looking at him, that that's it.

I've never heard him say that."

Arsenal sit fourth in the Premier League table, and host Hull on Saturday looking to avoid a third straight loss.

Wenger has guided the Gunners into the Champions League every season since arriving in north London and won the FA Cup on six occasions - including 2014 and 2015 - but the lack of a Premier League title since 2004 has seen increasing calls for him to go.

Pressed on the change he has seen in Wenger, Wright said: " On different things we were talking about, (he looked) full of life, you can see he's switched on - just a wonderful, articulate man, a lovely guy

You just feel, you know when someone..

He looks like someone's just whopped him in the stomach

He's lost all his wind

"I feel someone's going to ask me, 'Do you think he'll go at the end of the season?'

I would say, 'Just judging now..

"When he came into our dressing room in '96 it was refreshing to have that kind of management style - he wasn't shouting, he wasn't screaming," the former England international said.

"We were a dressing room that were self-motivating, with a manager that we'd realised treated you like adults in the work you're trying to do

The teams he's built, they've taken his kindness for weakness.

(Then Chelsea manager Jose) Mourinho called him a 'specialist in failure'

That said everything you needed to say about the character of that team."