Football's law-making body have revealed that the lines drawn to determine an offside in the build-up to a goal by the Video Assistant Referee (VAR) can be thickened to eliminate marginal decisions.

VAR was introduced in the Premier League at the start of the season and has drawn particular criticism from pundits and fans concerning goals ruled out for seemingly fractional offside decisions. The annual general meeting of the International Football Association Board (IFAB) was held in Belfast on Saturday to discuss a number of initiatives to maintain and reform football's laws.

Former ​Premier League official David Elleray, now technical director of IFAB, spoke after the AGM to address the amendments that could be made to the offside rule in regards to the implementation of technology benefitting the defender, rather than the attacker.

“You’ll always have the question of where you draw the line. “It’s not questioning whether you can see it, but asking if it’s right.

Regarding specifically the thickness of the lines drawn to make the decision, Elleray explained: “The game is telling us that was wrong and that it doesn’t want a goal disallowed for a nose offside.

“The obsession over 1cm or so won’t change. But there is nothing in the IFAB protocols about the width of the lines. That’s down to leagues.”

While 'armpit offsides' have largely dominated complaints of VAR, referees have also come under criticism for not using the pitch-side monitors to view contentious incidents themselves, a practice which is used much more frequently in continental leagues such as the ​Bundesliga or ​Serie A. 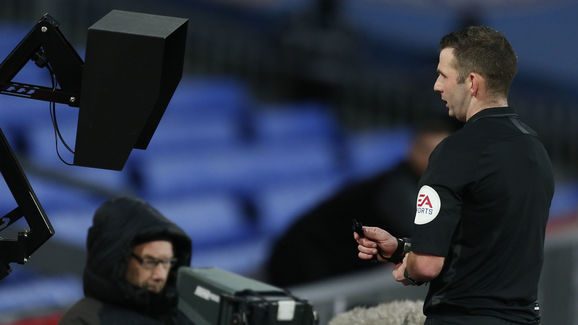 This reluctance is still the case after Professional Game Match Officials Board chief ​Mike Riley ​confirmed there would be no major changes earlier in the season.

Speaking in regards to this, Elleray said: “We surveyed 6,000 matches from the top competitions and the average was 75% of reviews are pitch-side monitors.

“Any competition significantly outside that is clearly out of step.

“But you should expect there will be changes next year. I would be astonished if not.”

Clearly there is a long way to go before VAR enjoys the same level of acceptance as goal-line technology, which also encountered problems during its implementation.

However, Premier League viewers appear to hold the technology to a higher standard than other nations, which could prove a problem for the future as FIFA president Gianni Infantino outlined: