Is Arsenes Arsenal ready for a serious challenge 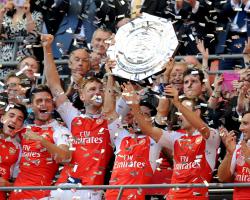 Victory in Asia, followed by a successful Emirates Cup and then finally beating JosÃÂ©'s Chelsea in last weekend's Community Shield is making Arsenal fans believe that this season could be the one.

The pundits aren't ruling the Gunners out, although Chelsea quite rightly are still the bookies favourites.

Arsenal did a JosÃÂ© on Chelsea by parking the bus; although to be fair, that bus looked very threatening on the break

Now with two FA Cup victories behind them, not to mention the two Community Shield successes, the taste of victory is now becoming much more the norm for the Arsenal players

They seem hungrier and quite rightly like the buzz associated from being real contenders.

The balance seems right for Arsenal

Their young players are now a year more experienced and with world stars such as Cazorla, Ãâzil, Sanchez to help bring them on even more there really is a wonderful opportunity before the Gunners

Some people say you make your own luck in football

Arsenal has a very strong squad

Cazorla and Walcott has just signed new long term mega-bucks deals, which is another sign the club are going places.

The signing of Petr Cech was a real masterstroke by Wenger

Simple things like this was not being done previously

Yes, you could be critical and say it doesn't need a keeper to highlight something like that, but little things like that WILL make all the difference at Arsenal.