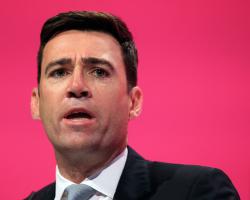 And he said Labour was ready to legislate if necessary to ensure elite clubs lived up to their 1999 promise to support struggling community facilities and projects.

Although the league puts ÃÂ£168million into grassroots sport, this represents only a fraction of the ÃÂ£5billion it has taken in from TV deals between 2013 and 2016, said Labour

Mr Burnham said: "The last Labour government secured a commitment from the Premier League that five per cent of all TV income should be invested in the grassroots.

"Since then, TV rights have soared by over 160 per cent, but David Cameron has failed to make sure that the game's elite honours its obligations to the next generation coming through.

"Football at grassroots is struggling and, in many cities, Premier League stadia loom over run-down changing rooms and overgrown pitches

The gap between top and bottom in our national sport has never been wider.

That is why a Labour government will take action to ensure that every penny the Premier League owes is paid in full, unlocking an estimated ÃÂ£400 million for the grassroots in the next parliament."

Labour sports spokesman Clive Efford added: "We will get tough and under Labour's better plan we will make sure the Premier League lives up to its commitment to invest in the grassroots

This will have a profoundly positive impact on football and many other sports."

Significant investment has flowed through all levels of the game from the grassroots upwards, and well in excess of the five per cent of domestic live broadcast revenues agreed in 2005.

That will mean even more investment in grass-roots football.

"Currently we invest ÃÂ£56m per season in this important work and Premier League football will generate over ÃÂ£1.2bn in tax revenue for the Treasury this year alone.

"This investment has seen over 50 new artificial pitches built in local communities and our club's coaches delivering thousands of PE lessons in primary schools across the country during the 2014/15 season."