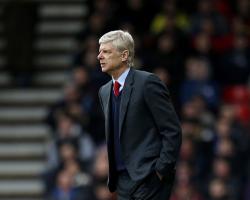 The Foxes travel to face Arsenal on Sunday and go into the weekend five points clear at the top of the table having beaten City and Liverpool in their previous two games.

Arsenal are third, behind local rivals Tottenham on goal difference, while City are only a point further back in fourth.

But, if Leicester can mastermind another memorable win this weekend they will remain on course for one of the most surprising title successes in the sport's history.

Wenger has long admitted that Claudio Ranieri's men are in the title picture, but said their display in a 3-1 win at the Etihad Stadium last Saturday has shown they are ready to go all the way.

"They had a decisive test against Liverpool and City," he said.

"If they had lost you would have said no, they can't do it

But these two games were the turning point in their season.

"(Against City) they had a kind of dominance and belief in every challenge, that special force where teams get into a zone where teams think: 'we can do this'."

Leicester have only lost twice in the league all season - the first a 5-2 defeat to the Gunners at the King Power Stadium back in September.

Since then they have only lost at Anfield to Liverpool on Boxing Day and Wenger admits he sees a different Leicester side now to the one his men dismantled almost five months earlier.

"They are more cautious at the moment," he said.

Look at the number of direct balls from their half to the opponents' half.

They do it very well

They suck you in and go very quickly in the opponents' half.

Today they are a bit more 'let's sit here and use our strengths in a very efficient way', which is what they did remarkably well against Man City."

Wenger revealed he was unhappy with the performance of his defenders at Leicester - and he has a selection headache ahead of Sunday's rematch.

Per Mertesacker has been on the bench for Arsenal's last two outings, with the World Cup winner replaced by Gabriel for the draw at home to Southampton and Sunday's victory over Bournemouth.

With no goals conceded in either of those games, Wenger must decide whether to recall Mertesacker or continue to partner Gabriel with Laurent Koscielny.

"I told my defence after the game in September 'I'm not happy with your performance' because they created goal chances," he said.

"Do you want to know if Gabriel starts? They have done well

He adapted slowly to the Premiership but today he has adapted

"He has been here one year, we bought him in January

He still has some issues with his English but he is improving.

"None of the two (Gabriel or Koscielny) is a real commander

I ask a bit more of Petr Cech to lead because they don't talk too much.

Despite Mertesacker's likely continued absence, Wenger denied claims he had dropped the 31-year-old because he was proving too slow against pacey opponents.

The Germany international was sent off for bringing down Diego Costa in the recent defeat to Chelsea and was then dropped for games against Southampton, who boast the pace of Shane Long, and Bournemouth, with former Gunner Benik Afobe leading the line with speed and agility.

"There are many centre-backs who are not pacey - John Terry is not pacey," Wenger added.

"You need at least one of the two

It's as well about reading the game

If I have a full-back on either side who is very quick there is not so much damage done because he can be covered from the right and the left.

Let's not forget he played all the games until now, against City and United, they all have quick strikers."