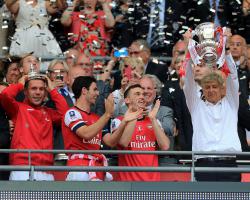 The Football Association insists no sponsorship deal has been finalised for the FA Cup, which has been without a main sponsor since the previous contract with Budweiser expired, but a proposal is understood to have been discussed at a board meeting which could see a ÃÂ£30million three-year package with the airline Emirates come to fruition

The Football Supporters' Federation would not oppose the name-change if the income was spent in the right way, with the FA maintaining all the money it raises is ploughed back into grass-roots football

Wenger guided Arsenal to FA Cup success for the fifth time last season, and will be back at Wembley to try to lift the famous trophy once again when they tackle Aston Villa on May 30.

B ut Wenger suggests so long as the fairytale continues on the pitch with giant-killings and shocks throughout the rounds, then the FA Cup will lose none of its integrity, however it is branded

"Will the name change? Certainly because of the sponsorship that looks to be the fate of the world that we live in," Wenger said

On that front I think it is a top quality."

Steve Bruce took Hull into the 2014 FA Cup final, where they were beaten 3-2 by Arsenal after extra-time having raced into a 2-0 lead

"We are frightened of change

However that's what change is, if you don't have to move with the times you get called a dinosaur," he said

"We can all like and admire tradition and history, but some things you have to go with the flow."

Tony Pulis guided Stoke to the 2011 FA Cup final, where the Potters lost to Manchester City.

Pulis, now in charge at West Brom, took a pragmatic view of the situation

He said: "Money controls everything, money speaks today and life is changed and you have to accept that

If the FA go for it they will go for it because of the money."