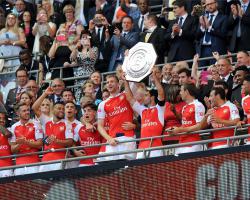 The Gunners maintained an impressive build-up to the new Barclays Premier League campaign with a well-organised 1-0 win against the 2015 champions, secured with a fine first-half strike from midfielder Alex Oxlade-Chamberlain.

While tougher tests await over the next nine months given Chelsea looked somewhat sluggish following their America tour and were missing main striker Diego Costa through a hamstring injury, Mertesacker is convinced Arsene Wenger's squad are now ready to mount a sustained challenge for the championship.

"We have had a great pre-season so far, and the peak was winning the Community Shield, but any significant predictions from the game is very difficult," Mertesacker said.

"It was a good test for both teams a week before the season, everyone has to adjust a bit now.

"They (Chelsea) played a great consistent season last year, we had a great run to the end of the season, and deserved to win the FA Cup.

"It (the championship) is decided by details, and which team can maintain a good spirit, that level of focus which is vital throughout the season.

"They (Chelsea) have shown it, and we have to step up and do more than last season, so that is the question for us.

"We asked the question to ourselves and you could see we really want to compete and do the next step."

Mertesacker believes with the addition of veteran keeper Petr Cech, signed for ÃÂ£10million from Chelsea, Arsenal now have assembled a group of players who can last the distance.

"You can see we have a great squad, a deep squad

That means there will be some difficult questions for the manager to answer and for the team on how we can cope with the difficulties," the German centre-back added.

"There are other teams who have also brought a lot of good players in, so it is difficult to say (what will happen in the title race).

"But we have good form, so whether we can keep that and start the season well is the key."

Midfielder Aaron Ramsey is also confident Arsenal can take their momentum from the past couple of seasons and turn it into a serious title challenge.

"We know what we are capable of doing, have a great squad, and are just as excited as well about what this season might hold for us," he said.

"There is always pressure on Arsenal to go out and win games, to win trophies, so it is nothing new to us as players.

"I am not a betting man, but we all feel confident we can go on and achieve something this year."

Jack Wilshere did not feature at Wembley because of an ankle problem.

The midfielder will continue to be assessed ahead of Sunday's Premier League opener against West Ham, which could well come too soon for a return to action.