Mesut Ozil- The man with the golden touch 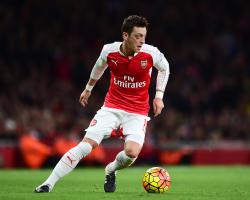 The life of a professional footballer is an incredibly odd one

They have become the envy of the World

However they are constantly subject the criticism of the media

Many footballers have fallen victim to negative press from both fans and the media and this can often be incredibly damaging to a playerÃâs confidence, denting their form further.

Where some have crumbled under the criticism others have thrived

The German was a pass-master at Real and it was reported that even the mercurial talent of Cristiano Ronaldo was disappointed at RealÃâs decision to sell Ãâzil, RealÃâs best assister

For someone as talented as Ãâzil, 14 assists and nine goals in 47 games

ÃâzilÃâs performances had not yet warranted a price tag of over ÃÂ£40 million and he was finding it difficult to impose himself in England in a league which is far more physical and fast paced than La Liga.

His talent was questioned further by those on social media

Multitudes of fans, and not just Arsenal supporters, questioned his worth to the team and whether his enormous price tag was hanging heavily over his head

Those Arsenal fans, along with manager Arsene Wenger, who stuck by Ãâzil citing that form is temporary and class is permanent have been rewarded hugely this season

The German has been prolific this season with 15 assists and two goals in 16 games registering 0.93 assists per game, nigh on an assist every game

Taking into account his struggles in the last two seasons, this is an enormous improvement in the GermanÃâs output for the team.

Four victories in four games including the 3-0 Champions League away victory over Olympiacos have kept Arsenal in the hunt both domestically and abroad with Ãâzil registering four assists in four games since SanchezÃâs injury displaying ÃâzilÃâs importance to the team.

Sanchez has reportedly been ruled out until after the turn of the year meaning he will miss the festive games against Southampton, Bournemouth and Newcastle United with Wenger hoping he will be back in time for their clash against Liverpool on the 13th of January

However Arsenal currently sit second in the league, two points behind Leicester and four clear of Manchester City whom they beat 2-1 in their final game before Christmas

The improvement in ÃâzilÃâs form have not only vindicated the player himself, but it has also validated WengerÃâs decision to spend over ÃÂ£40 million on the player

With the selling of star players such as Samir Nasri, Gael Clichy, Bacary Sagna, Cesc Fabregas and Robin van Persie in recent years, the Gunners were labelled as a selling club by rivals with their best players leaving for pastures new

Wenger was criticised most prominently for his lack of big name signings in recent years.

The three afore mentioned players are the biggest name signings Wenger has made in recent years and they are all justifying the money spent on them along with the trust bestowed upon them shown through WengerÃâs refusal to spend huge sums of money on a multitude of players.

Since then the Czech Republic International has put in a number of man of the match performances domestically and in Europe culminating in Arsenal having the joint best defensive record in the Premier League, only conceding 14 goals, the same as Tottenham and Manchester United

He has so far proven Wenger as correct in only bringing in one player in the summer transfer window.Cech has been able to reinforce the superb work that the entire Arsenal team has put in this season with Ãâzil in particular coming in for heaps of praise

With all this combined does it mean Arsenal will win the title this reason? This campaign seems to be ArsenalÃâs to lose

Leicester City have been superb but their title challenge hinges on whether they can cope over the hectic festive period and into the new year when injuries begin to creep into a squad which is far smaller then that of the bigger teams around them.

The Gunners also beat their main title rivals Manchester City in a game which seemingly spelt the start of a new Arsenal, one which can score the silky and picturesque goals whilst also being able to defend a lead without many of their first choice players, which is exactly what they did against City

The German will also have Arsenal legend Thierry HenryÃâs record of 20 assists in a season in his sights and if he can reach, and eclipse that total then no one will bet against Arsenal lifting the trophy this year

However former Arsenal man Cesc Fabregas was also in superb assisting form last season and seemed on course to beat HenryÃâs record only for the Spaniard to fall away in the latter part of the season, eventually finishing on 18 assists.

With Ãâzil in superb form, a solid defence and some of their best players still to return from injury, there is surely only one thing that can stop Arsenal winning the title and that is themselves.