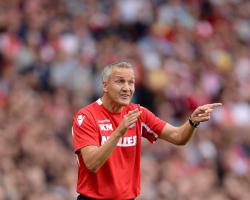 Millen was in temporary charge at the Emirates Stadium following the shock departure of Tony Pulis less than 48 hours before the new Barclays Premier League season kicked off.

The well-organised Eagles were left frustrated after taking the lead through a first-half header from Brede Hangeland, one of the few summer signings sanctioned by chairman Steve Parish, as the Gunners fought back to snatch victory in stoppage time through Aaron Ramsey.

Laurent Koscielny flicked in a free-kick from Â£30million Chile forward Alexis Sanchez to level before the break.

Arsenal lacked a cutting edge in the final third, creating only a few half-chances against a side who had Jason Puncheon sent off for a second yellow card - until Ramsey slotted home after Mathieu Debuchy's shot was saved.

Millen, who was in temporary charge last season after Ian Holloway left ahead of Pulis' appointment in November, feels he has unfinished business with the club.

"I am proud of the players, of the performance, but am disappointed not to get something which we deserved," he said.

"When you think what the players have been through in the last couple of days, you are never quite sure how they are going to respond to Tony leaving.

"We said to them before the game 'make sure there are no excuses' because I didn't want to have to stand up for them and say their heads weren't right to do a job because of what's happened."

Millen continued: "Would I like it to be my last game? No, I would like to continue.

"I enjoy being in charge

Whether it's the right time or not, I will speak to the chairman tomorrow.

"In the last two days the chairman has not had a chance to speak to the players, he's not spoken to me about what his ideas are going forward, he just said 'let's focus on today's game'.

"On Monday I am sure there will be some more conversations

The players need to know which direction the club is going

Hopefully at the start of the week there will be some more answers.

"If the chairman felt it was right for me I would sit down and talk to him about it.

They respect my decisions."

Whoever takes over will have little chance to bring in the required additions before the transfer window closes.

"We have identified all summer the areas we need to strengthen but for whatever reason it's not happened," said Millen.

"Tony knew what players he wanted and the club do

The new manager who comes in, in two weeks he's got to know which players he wants

It's not ideal if a club chooses them - you need a manager to choose new players."

Veteran Palace forward Glenn Murray believes Millen would have the trust of the players to take the club forwards.

"A lot of the players have worked with Keith for a long time and respect him," said Murray, who joined from Brighton in 2011, helping the club win promotion two years ago and was on the bench at Arsenal.

"We showed in the time when he took over from Ian (Holloway) and again today that we work hard for him and enjoy playing under him.

"It has got to be the right man now, and it will take as long as it takes, that is up to the hierarchy."

Arsenal, meanwhile, can now head to Besiktas for their Champions League play-off on the back of a positive result.

"Because of the physicality and organisation level of Crystal Palace, it was very difficult for us," said manager Arsene Wenger, who handed a Premier League debut to Â£30million summer signing Alexis Sanchez.

"We lacked a bit of pace in the final third to change what we built up into dangerous situations, but it was enough to win the game and win the three points, so now let's focus on Besiktas."

Arsenal have yet to bring back World Cup winning trio Per Mertesacker, Mesut Ozil and Lukas Podolski, who should all be involved ahead of the trip to Everton next weekend.

Wenger added: "I believe that our attitude was right, on our fluency we can do better, but that will come

Let's first get everybody physically ready."