Mohamed Elneny honoured to have been signed by Arsene Wenger 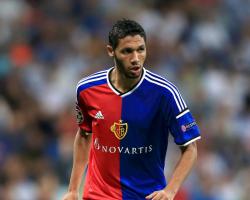 He is expected to be registered ahead of Friday's noon deadline to be eligible and he cannot wait to start work with Wenger.

It is an indescribable feeling (to have signed)," he told Arsenal Player.

"Mr Wenger is a highly respected manager and one of the world's best managers; it is my honour to be trained under his management.

"I would like to tell (the fans) that, although you have not seen much of me, I promise I will contribute positively with the team."

The 23-year-old hopes to be able to contribute towards an ambitious treble this season having set his sights high after leaving Basle.

Arsenal are top of the Premier League, in the fourth round of the FA Cup and the last 16 of the Champions League - although they face a tough challenge against defending champions Barcelona - and Elneny has big ambitions.

"I am hoping that we win the Premier League and cup this season, and the Champions League as well," he added.

"Arsenal is one of the world's greatest teams, and I am very keen to participate positively with my new team and to give my best for the team and for myself."

While the best Elneny could hope for is a place on the bench on Sunday as in-form midfielder Aaron Ramsey is set for a key role.

The Wales international has scored in his last two matches, including his side's opener in the entertaining 3-3 draw at Anfield, and he admits he is confident about his sharpness in and around the penalty area.

"I am feeling confident in there," said.

"I know my team-mates have the ability to pick my runs out and give that final ball for me so I can get on to it.

"It was a good ball from Joel (Campbell) again so I was delighted with that goal.

"We have a tough game coming up against Stoke - we haven't found it easy the last few times we have been there (no victory in five visits and three defeats) but we will be looking to get back to winning ways and get back on another run."