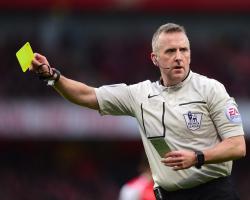 The Football Association has announced the 44-year-old West Riding official will take charge at Wembley on May 30 with Darren England and Simon Bennett as his assistants.

Craig Pawson has been named as the fourth official and Harry Lennard will be the reserve assistant referee.

Refereeing an FA Cup final is an honour an official can only undertake once in their career and Moss admits he was thrilled to be asked.

Moss told TheFA.com: "It was a complete surprise

For any referee it is the pinnacle of your career.

"I've been involved in the Community Shield and the Conference and Championship play-off finals - but this is the biggest game I will ever referee.

We always had the programme and we went to a couple of finals at Wembley.

Referees are no different to players and you strive always to get those massive games."