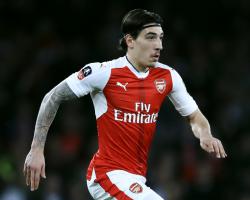 There has been fresh speculation of a possible summer swoop by Barcelona for Bellerin, despite the fact the 22-year-old signed a new long-term contract with the Gunners in November.

Bellerin admits he finds it "special" to be on Barca's radar and has not ruled out one day returning to his home-town club, despite once vowing he would not.

However, the highly-rated full-back also expressed how important Gunners boss Wenger is to him

In an interview with Spanish newspapers El Mundo Deportivo and Sport, Bellerin said: "The loyalty to this person is worth more than money, it's something very important to me, that he's there carries a lot of weight for me."

Wenger, whose own Gunners future remains uncertain, with the 67-year-old Frenchman out of contract in the summer and Arsenal fans split over whether he should continue, has overseen Bellerin's emergence into one of the game's brightest talents

The Spaniard has been under Wenger's watch since 2011, when he swapped Barcelona for London after becoming "disillusioned" at the Catalan giants.

At that point, Bellerin felt he would never return to Barca, but he now appears to have softened his stance

The defender, who is currently on international duty with Spain Under-21s, said: " Any player would be flattered by interest from Barca, it's the best club in the world and that is very nice

"The fact that I grew up in the Barca academy also makes this a bit more special, although for now I'm focused on these games and on the season, and the rest will come later

"When I left Barca my idea was not to return, because my exit was a little complicated

Just as other players who leave saying they will return, I went to live an adventure in England, to try to be a footballer and not return.

"I left Barcelona because I felt the club did not have faith in me, I didn't feel valued

"But you don't know what the future holds and you cannot close any doors."

Bellerin also spoke about reported interest from Manchester City, who are now under the guidance of former Barca boss Pep Guardiola.

He said: "I know there was interest from Manchester City, it's flattering that a coach like Guardiola thinks of me

"It's very nice that there are several big clubs interested in me, but if one of them is Barca then it's special."