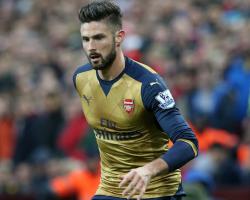 They moved a point clear at the top, although Leicester will replace them if they beat Chelsea at the King Power Stadium on Monday

Giroud scored a hat-trick in Wednesday's 3-0 Champions League win at Olympiacos and netted his 50th league goal for the Gunners - and 14th of the season - at Villa Park and boss Wenger reckons the 29-year-old can be under appreciated.

He said: "I believe he is at the top of his game

He is questioned sometimes but finally the numbers get people to realise he is a good player.

"He's not got electric pace, he is more a player who likes to play with his back to goal

Mentally he is very strong."

He said: "Let's see tomorrow, if Leicester beat Chelsea they have a very good chance to be top at Christmas.

"It's a big game, we want to win at home and beat City at home

We have eight days to prepare

I knew Villa were fighting to survive."

"I think the closest to have the chance is Sanchez but medically we think he won't be ready - but Sanchez being Sanchez you never know," he added.

In contrast to Arsenal, Villa are eight points from safety after 15 winless games in the league having won just two points from the last 30 available

They go to Newcastle on Saturday before facing fellow strugglers Norwich and Sunderland over Christmas and boss Remi Garde, who won the title with Arsenal in 1998, admitted the games will define the season

"Probably, we will have to win if we want to be safe," said Garde, who recalled Jack Grealish to the squad after dropping him for two games for partying after a 4-0 defeat to Everton last month

"I still believe we are capable of winning the next game

I enjoy working in this league

We are struggling, I still haven't won a game and I'm very frustrated but I know in football you can change things with work."