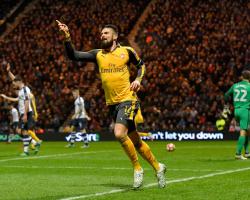 The 30-year-old France striker has returned to the side in recent weeks to score four goals in as many appearances.

Giroud's last-minute goal helped beat Preston in the FA Cup third round on Saturday, which came after he netted in stoppage time to secure a dramatic 3-3 comeback draw at Bournemouth just two days following his "scorpion kick" effort in the win over Crystal Palace.

While still having around a year-and-a-half left on his current deal, the forward, signed from Montpellier in June 2012, hopes to soon tie-up his long-term future with the Gunners.

In an interview with French broadcaster Telefoot, Giroud said: "We are about to reach an agreement for an extension (to my contract).

"It was also a gesture of confidence, I want to continue the adventure here in this family of Arsenal

Giroud added: "When I spoke to the coach, he always told me that I was an important player.

"I know what I am capable of

I just needed to be patient, to work in training and wait for my hour to come."

Manager Arsene Wenger, meanwhile, has himself yet to announce any plans for past the end of his current contract, which expires in the summer.