​You're ready for a trip down memory lane.

So what else are we waiting for?

Let's hop in the DeLorean and see what history has in store from 7 April over the years.

 On this day in 1974, Johan won his first La Liga with @FCBarcelona after beating Sporting Gijon. It was Barça's first league in 1️⃣4️⃣ years. #CruyffLegacy pic.twitter.com/SoJ14UAtml

For Barcelona to go 14 years without a league title seems unimaginable these days, but once upon time the club weren't at the same level they are today.

Eventually, that 14-year spell ended. And Barcelona have Johan Cruyff to thank. It was the Dutchman's first season at the club after joining from Ajax, and that title in 1974 was the first of many which would cement his place in the club's proud history. This wasn't just any Milan side either. Andriy Shevchenko, Kaka, Andrea Pirlo and Paolo Maldini all started. The Rossoneri were so good, in fact, that Rui Costa and Filippo Inzaghi could only make their impact from the bench.

It was the perfect start for Deportivo. Wálter Pandiani scored inside five minutes and by the time the referee's whistle went for half time the game was all square, with Juan Carlos Valerón and Albert Luque scoring the goals.

It was advantage Dépor Fran made sure of the result with a late goal which knocked Carlo Ancelotti's Milan out of the Champions League.

2007 - Arsenal Lose Their First League Match at the Emirates Arsenal had already lost to West Ham at Upton Park during the 2006/07 season, but the Gunners were unbeaten at their new home, so Alan Curbishley's side didn't look like the toughest opposition when they journeyed to north London on matchday 32.

The visitors did need a stunning performance from Rob Green to make history on that day, but it was Bobby Zamora who stole the headlines thanks to his stunning chipped effort just before half time.

One-nil to the [opponents of] Arsenal, as they say. 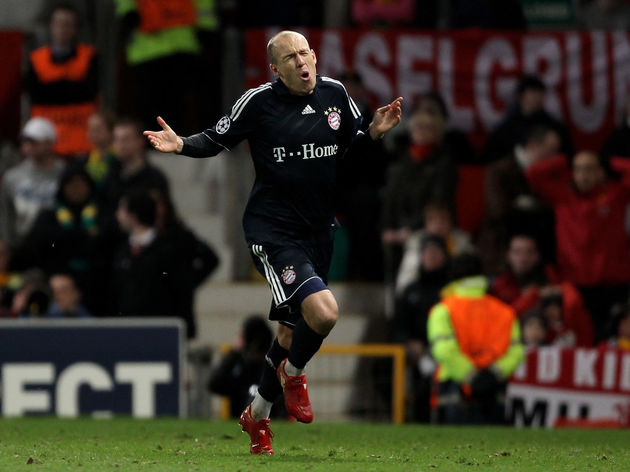 Sometimes, you can re-watch a goal you saw years ago and instantly remember where you were when it happened.

Arjen Robben's volley at Old Trafford was one of those goals.

The Dutchman was left completely unmarked on the edge of the penalty area, so it was no surprise Franck Ribéry picked him out from a corner. What was a surprise was the fact Robben's volley flew into the bottom corner.

It was the goal that sent Bayern Munich through in the Champions League, and although the club eventually reached the final in Madrid, Inter

The message for Manchester City was simple; win the game, and you win the league title.

And as far as title-deciding games go, Pep Guardiola couldn't have asked for a better start.