Just in case you've forgotten while the world has been paused:

Here we are again, with no football being played, so it's time to open the memory bank once more and take a deep dive into what happened on this day in history.

Let's have a look at the best moments from 16 April. ​Newcastle United striker Malcolm Macdonald became the first (and only) player in England history to score five goals in a competitive fixture when he steered his country to a 5-0 win over Cyprus in a European Championship qualifier at Wembley in 1975.

​We've seen a handful of poachers bag four, but Macdonald's record still stands, and it probably will for some time... or until Harry Kane fills his boots in a qualifier against Andorra/ San Marino/ Faroe Islands.

On his birthday, we look back at THAT Gary McAllister derby winner ⚽️ pic.twitter.com/VGRPJmhi9y

At Goodison Park in 2001, ​Everton and ​Liverpool looked to have played out an enthralling 2-2 Merseyside Derby draw. With 93 minutes on the clock, the spoils were to be shared. Enter Gary McAllister.

From all of 40 yards, McAllister fired a free kick into Everton's bottom corner to steal all three points and leave 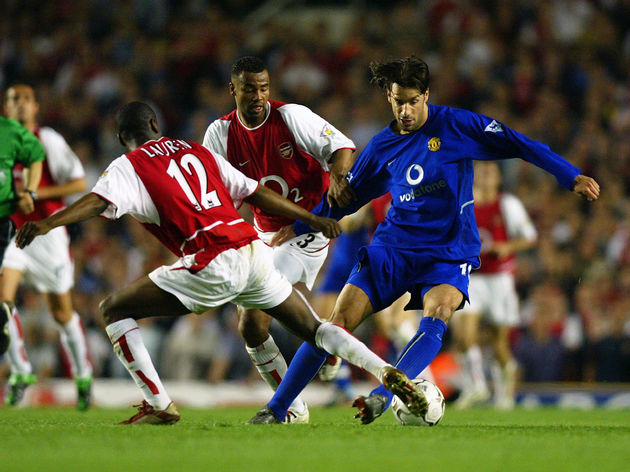 The 2002/03 ​Premier League title race reached its peak as leaders ​Manchester United and defending champions ​Arsenal battled to a 2-2 draw, but it was United's Ruud van Nistelrooy who stole the show.

The Dutchman skipped past Sol Campbell and sprinted away from Martin Keown, before ending he stunning run with a delightful chip over the onrushing David Seaman. Pure class.

In one of the most dominant individual performances in Premier League history, Thierry Henry fired home four goals in Arsenal's 5-0 win over ​Leeds United in 2004.

There were plenty of defence-splitting runs and even a Panenka penalty for good measure, as Arsenal's Invincibles ran riot against the relegated Leeds.

In England, Erik Edman is remembered for one thing, and that one thing just so happened to come on this day in 2005 in ​Tottenham Hotspur's 2-2 draw with Liverpool.

The Swede gave his side the lead with a ferocious​ 35-yard strike which would probably still be in the air today if it hadn't hit the back of the net.

He only scored two goals during his career, but most players won't ever score a better one than this.

2006 - Gary Cahill Pulls Out the Acrobatics

Gary Cahill is mainly known for his defending, but the centre-back knows his way around the attacking third as well - just ask ​​Birmingham City.

Back in 2006 during his time with ​Aston Villa, Cahill netted an audacious overhead kick to help steer the Villains to a memorable 3-1 win in the Second City derby. Not a bad time to pull that out.

Japanese wizard Shunsuke Nakamura is known for his mind-boggling strikes. Free kicks are usually his weapon of choice, but he fired home a stunner from open play in Celtic's ​vital 2-1 win over Rangers in 2008.

Nakamura unleashed an incredible curling effort from distance which defied all logic as it spun its way into the back of the net, leaving goalkeeper Allan McGregor floundering as it flew past him. In 2011, ​Real Madrid and ​Barcelona faced each other four times in just over two weeks. In the first game, they played out a fiery 1-1 draw which saw both ​Cristiano Ronaldo and ​Lionel Messi fire home from the penalty spot.

Like any El Clásico, there were plenty of crunching tackles and face-offs, and there was even the customary red card. However, believe it or not, it didn't go to Sergio Ramos, with Raúl Albiol doing the honours instead.​

Yaya Touré fired ​Manchester City into the FA Cup final at the expense of rivals Manchester United​ on this day in 2011.

It was their first final in 30 years, and Touré got himself on the score sheet there as well as his goal saw City pick up a 1-0 win over Stoke City and lift the cup.

In the 2014 Copa del Rey final against Barcelona, ​Gareth Bale proved his worth to Real Madrid by sprinting faster than the speed of light to fire home with just five minutes left to earn a 2-1 win.

Marc Bartra pushed him well off the pitch just inside the Barcelona half, but Bale put the afterburners on and flew by anyway. It looked more like a glitch in a video game than anything else.​ ​Sergio Agüero bagged an incredible hat-trick to tear ​Chelsea apart in 2016 as his Man City side stormed to a 3-0 win.

If that wasn't bad enough, Chelsea had goalkeeper Thibaut Courtois sent off as well, with everyone at Stamford Bridge closing their eyes and simply waiting for the catastrophic 2015/16 campaign to be over.​

Ajax's sensational run to the ​Champions League semi-final continued as they picked up an outstanding 2-1 victory over ​Juventus at the Allianz Stadium.

Centre-back Matthijs de Ligt's headed goal decided the game and clearly convinced Juventus of his talent, as I Bianconeri only went and signed him a few months later. If you can't beat them, sign them.