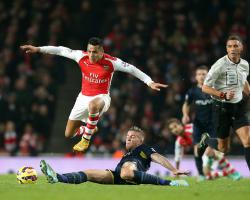 A big-money summer arrival from Barcelona, the 25-year-old has hit the ground running in north London with a remarkable return of 14 goals from 22 appearances.

It took a last-gasp Sanchez strike to see off the well-drilled visitors 1-0, after which Oxlade-Chamberlain heaped praise on the game-changing Chile forward.

"There is no rest for him," the England midfielder told BT Sport

"On recovery days he wants to be playing and he is not happy if he is not allowed to play the game at the end.

"In training, he wants to win

He has brought that winning mentality to the side and I think it definitely rubs off on a lot of players.

"It has been an eye-opener for me

To make it to the top and to be able perform like he does week in, week out you have got to be an absolute winner and you never want to lose at all.

"He is not happy when he doesn't score

If I scored as many goals as he has at this stage, I'd be over the moon.

"He has been brilliant for us and a breath of fresh air, so hopefully he can stay in the form that he is in and we can help him out to keep producing goals like he has been."

As good as Sanchez is, though, Oxlade-Chamberlain - like anyone else in attendance at the Emirates Stadium - will be aware Arsenal need to improve and quick.

This was a far from convincing display from Arsene Wenger's men and one which left Saints defender Toby Alderweireld cursing his luck.

A first-half injury to Jack Cork saw the Belgian moved from centre-back to holding midfield for the second match in a row - a role he impressed in until a hamstring injury forced him off with less than 10 minutes remaining.

Saints had already used their full complement of substitutions by that point and Sanchez capitalised on the fact Saints had to end the game a man light.

"I think everybody knows when it happens with your hamstring you can't run any more, so with pain in my heart I had to go off.

"That was really s*** and, unfortunately, we let a goal in.

"On Thursday I will have a scan and I hope it's not too serious, but for sure a hamstring is always bad, so we'll see.

I will do everything to be back very quickly on the field, but that's for the future and I can't tell."

Injuries to Alderweireld, Cork and Dusan Tadic made this a costly defeat for Saints - hardly the ideal preparation for Monday's match against Manchester United.

It is a game they not only approach low on numbers but fresh from back-to-back losses for the first time this season.

Saints have only been beaten four times in all competitions during their remarkable start, yet those reverses have come against Liverpool, Tottenham, Manchester City and Arsenal.

The latest defeat will only fuel the doubters' suggestions that Saints are only third in the standings due to a kind fixture list, but such talk angered Alderweireld.

"Maybe last week we were not that good, but today we played very good against a good team, especially here, where it's very difficult to play," he said.

"I think we played very good and I think we deserved a point at least.

"They have to watch the game

Maybe after Sunday, City (3-0 home defeat), we didn't play that good, but today we played very good, so we're still there and we will work very hard to get the points again, so we will do our best."