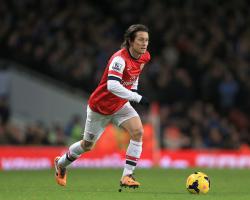 The 33-year-old has made 21 appearances in all competitions for the table-topping Gunners and got on the scoresheet in the recent FA Cup third-round win over fierce rivals Tottenham.

Rosicky, who has been at Arsenal since a 2006 move from Borussia Dortmund, was expected to feature less this season following the emergence of Aaron Ramsey and the arrival of Ozil, but the Germany international reckons his experienced team-mate is one of the best players in the division.

"We're strong when we're on the ball, we play quickly and I have lots of fun playing alongside the team," he told Arsenal's official website.

"In my opinion, Tomas belongs to the best midfielders in the Premier League.

"When you see how much he gives for the team and how he enjoys being on the ball, it makes us happy to have a player like that in our ranks."

Ozil moved to the Emirates from Real Madrid for a fee reported to be in excess of ?40million and said he has found Arsene Wenger's side to be exactly what he expected before completing the switch.

"Before I came to Arsenal, I knew that the club belonged among the top five in Europe," he added.

"I knew that they were technically gifted and strong and you see that on the training ground when we are doing passing drills - the ball is always moving.

"I think that's thanks to the way young players are coached at the club because they always train with the ball, run passing drills and ultimately it's being rewarded."

The Gunners will be looking to maintain their one-point gap back to Manchester City when they host Fulham on Saturday, with Rosicky likely to be missing with a suspected broken nose sustained in Monday's 2-1 win over Aston Villa.