Ozil - I have nothing to prove 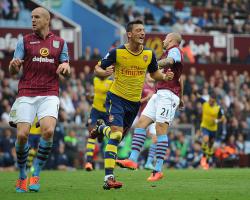 He swept in the opening goal and created the second for Danny Welbeck at Villa Park when deployed in a more central role by Gunners boss Arsene Wenger.

The 25-year-old has continually found himself under scrutiny since becoming Arsenal's ÃÂ£42million club record signing from Real Madrid on deadline day in September 2013.

However, Ozil is not about to let anyone else's opinion get in the way of his continued progress with the Gunners.

"I don't play to prove anything to anybody, I play for Arsenal," Ozil told German news agency DPA.

"I have the feeling that I am criticised more, that happened to me in the Bundesliga and also at Real Madrid.

"We have only just started the season (at Arsenal), we have new players in key positions.

"The collective game, which is something I have a lot to do with, cannot then just work well from one day to the next."

Ozil added: "(Just) 10 weeks ago I was elected to the team of the season in England (via an internet poll on the Premier League website).

"I was world champion then

This is strange, but I know what I can offer."

Ozil is likely to be one of several first-team players rested by Wenger for the Capital One Cup tie at home to Southampton on Tuesday night, but should again be the key man for Saturday's north London derby against Tottenham at the Emirates Stadium.

The cup tie could see a debut for Colombia goalkeeper David Ospina, who has yet to feature apart from on the bench after regaining fitness following a summer move from Nice.

Costa Rica forward Joel Campbell may be another deployed against the Saints, along with fit-again midfielder Abou Diaby.