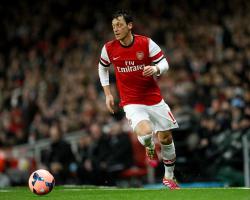 The German playmaker produced another subdued display in the 5-1 trashing at Liverpool on Saturday, when he again drifted in and out of the match.

Some Gunners fans and pundits alike are starting to become impatient with the 25-year-old, who arrived from Real Madrid in a much-heralded Â£42.5million deal on deadline day in September 2013.

Ozil's last eight appearances have returned only two assists and no goals.

However, Wenger is in no doubt the midfielder has all the qualities needed to develop his game in the Barclays Premier League, with another stage set to showcase his talents on Wednesday night when Manchester United come to the Emirates Stadium.

"Ozil feels the pressure of course, because he knows a lot is expected when you are a big transfer

There is a big expectation level, but he should not worry about that, just play in the team and enjoy it, give his best

That is the best way to deal with it," said Wenger.

"But on the other hand, you must say he doesn't come from a small club - he comes from Real Madrid where the pressure is always huge as well, so he is used to it."

Ozil, of course, is not the first player who might need time to adapt to the hustle and bustle of the English top flight, and Wenger stressed everyone must be patient.

"He thinks it is more physical here for sure and he works on his body strength to deal with it," said the Arsenal boss.

"He needs understanding, because he always wants to do well.

"He is not a guy who doesn't care, his style can sometimes look like that, but he is really the opposite character.

"He cares about the game, he wants to do well and needs more support."

Ozil marked his arrival with a superb strike in the Champions League win over Napoli at the Emirates Stadium on October 1, but has not found the net since early December, which is now some 11 appearances ago.

Wenger accepts that is an area where the German could sharpen up.

"You want the guy who plays behind the striker to score some goals and sometimes he is too obsessed with making the perfect pass when he could take a shot at goal," he said.

"(He can improve) by practising on it and convincing him by showing him situations where he can shoot more, and he will do that."

While debate over Ozil's form continues to be centre stage, Wenger maintains "we have not to be focused on one player" as Arsenal look to respond against an indifferent United side.

Defeat at Anfield on Saturday lunchtime saw the Gunners later knocked off the top of the table by Chelsea, although title rivals Manchester City also dropped points in a goalless draw at Norwich.

"It is a good opportunity four days later to respond straight away and that is what we want to do," Wenger said.