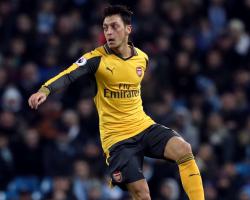 The Germany international has yet to pen a fresh contract at the Emirates Stadium, with his current deal having 18 months left to run.

It was reported last month that both Ozil and team-mate Alexis Sanchez are seeking parity with the Premier League's top earners before putting pen to paper on extensions.

Ozil, Arsenal's club-record signing, has missed the last three games through illness but is a major part of Wenger's search for silverware.

The 28-year-old has hit nine goals this season and he said Wenger's presence is the main reason he is at Arsenal.

Wenger has been at the helm for over 20 years but his own deal expires at the end of the season and Ozil is keen to know what the future holds for the Frenchman before he commits beyond 2018.

"I feel very, very good with Arsenal and have shown my willingness to extend my contract with the club," he told German magazine Kicker.

"The fans want me to stay

Now it's down to the club

The club know that I'm here above all because of Arsene Wenger, who brought me here and whose trust in me I enjoy.

He also played down suggestions he was holding out for a bumper pay-rise and reacted with indifference to recent comments made by former Arsenal favourite Thierry Henry.

Speaking on Sky Sports before Christmas, Henry said both Sanchez and Ozil were holding the club "hostage" over their wage demands.

But Ozil said the club's all-time record goalscorer does not know enough about the situation to be able to comment.

"Everyone has the right to say their views," he said.

"But these comments don't interest me

Such former players or other people who weigh in with their opinions don't know what's actually being said between the club and me."

Wenger has said he does not want to discuss his own future until towards the end of the campaign and has insisted he will not let Ozil and Sanchez leave before their contracts expire, even if they end up going for free.