​Arriving to little fanfare - he was spotted in a Brazilian airport with more people crowded around the vending machine than vying for his autograph - the gamble taken on Pablo Mari was one that garnered the obligatory doses of disillusion.

A late-bloomer who never really shone in European football was supposed to walk through the Emirates Stadium doors and be the saviour to Arsenal's unsalvageable defensive shambles? Oh, and he was nowhere near match fit having not played since late December? Right, sure. Wait, and he cost a £4m loan fee? Christ. And don't get me started on Cedric Soares.

On to the next round of the #EmiratesFACup  Happy with the win and my debut for @arsenal ⚪️ Huge team effort and great support from our fans! Let's go Gunners!  pic.twitter.com/uCEDHBzyVD

​David Luizdistribution is not as assured on that side and precious time is wasted during build up play when he is constantly shifting the ball to his right side.

Arteta hasn't had a choice, though. He inherited a squad boasting six right-footed centre-backs, none of whom were, let's say, any good.

Which is why Mari's strong showing at Fratton Park bodes well. What does it bode well for? A number of things, really.

It will get the best out of Luiz, that's for sure. Granted, I know, Luiz's 'best' is hardly inspiring, but tough luck, he's the best ​Arsenal have got for the rest of the season at least.

As seen against Pompey, the addition of a defender comfortable on his left foot meant Arsenal could switch to a back three when in possession. This is a ploy Arteta looks to have began implementing to make up for Bukayo Saka's defensive deficiencies, and one that initially started being performed by Granit Xhaka.

However, ​Xhaka is slow. Mari isn't the quickest, but he's at least not on the Swiss' level.

His overall showing was solid, which is encouraging, but he's unlikely to be a long-term star for the club moving forward. There is every chance they'll make the move permanent if he maintains such performances, but he's hardly the calibre of centre-back that is going to see Arsenal challenge for the ​Premier League top four again. 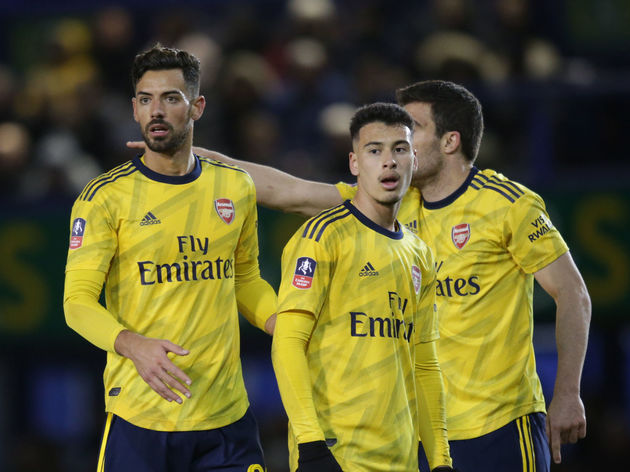 But it's given Arteta the platform from which to instil new ideas and, for the most part, they came off against the League One outfit. No disrespect to Portsmouth, who put in an impressive first half display in particular, but tougher challenges will face Arsenal before the end of the season.

11 - Arsenal have gone 11 games without defeat away from home in all competitions (W4 D7), since a 0-2 loss at Leicester in Unai Emery’s final away game in charge of the club – the Gunners longest unbeaten run on the road since March-December 2016 (a run of 15). Adapting. pic.twitter.com/DdbxgJ9H8e