Petr Cechs gloves are off to Chelsea by mistake 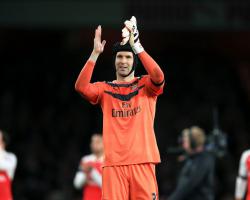 Cech, who spent 11 years at Chelsea before completing a move across London to Arsenal in the summer, was expecting a new pair of gloves ahead of the match between the two clubs this weekend.

But they were instead delivered to the Blues' Cobham training base, rather than Arsenal's London Colney home, although Chelsea did rectify the issue by flagging up the error.

Cech recently set a new record for the number of clean sheets kept in the Barclays Premier League and will no doubt take his place between the posts when his former club visit the Emirates Stadium on Sunday.

When candidly asked if he would be checking Cech's new gloves for signs of tampering - be it grease on the palms or loose stitching - Arsenal manager Arsene Wenger replied: "He's big enough to check his own gloves.

"I think he has enough gloves

These kind of mistakes can happen

I consider him now as a real Arsenal player who looks to me as if he's been here forever.

"He has adapted so well and integrated to team spirit

This kind of incident is an accident."

The Czech Republic international won four league titles during a trophy-laden spell at Chelsea, which also saw him lift the FA Cup four times and the Champions League in 2012, and now he is playing a large part in Arsenal's own title bid - with the Gunners top of the league going into the weekend.