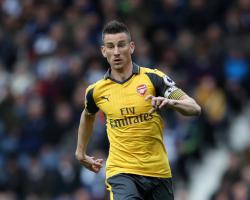 Six defeats in their last nine matches have seen the Gunners knocked out of the Champions League and drift out of the top four in the Premier League.

Wenger's future as manager has been the subject of increasingly keen scrutiny as he approaches the end of his contract in the summer.

After almost 21 years in charge, Wenger has yet to announce whether he will stay at the club beyond this season, although he teased at the weekend that he has reached a decision and will soon declare his intentions.

France defender Koscielny says the players must step up their performances as they look to ease the strain on their under-pressure boss.

He said in a national team press conference on Thursday, when asked about Wenger: "He's someone who's been very important in my career.

"It's him who gave me my chance at Arsenal, who fashioned me as a player and as a man.

"We're in a complicated situation but it's not only his responsibility.

Arsenal are next in action on April 2 when they face Manchester City in the Premier League.

Asked about his Arsenal career, Koscielny added, according to lequipe.fr: "I feel good, I know the club and the people who work there perfectly.

"I appreciate my life in London, and so do my family

At the moment, I've got no reason to want to leave

I've got a long contract, and I'm happy where I am."