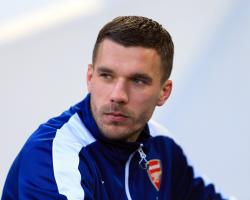 Back in his home city of Cologne for a friendly against the United States on Wednesday, Podolski had his habitual smile as he met the media, showing that a year spent largely on the bench or in the stands had not dampened his spirits.

"You can take experience from everywhere you play abroad, even if it was not my best year from a sporting perspective," said the 30-year-old.

"But I still have many years ahead of me and a burning desire to play football."

That could still be with Arsenal.

Podolski's contract with the Gunners still has a year left to run on it and, after scoring just one goal in a loan spell at Inter and failing to convince the Serie A club to make his move a permanent one, he sees no reason why he will not be staying in London next season.

"There's bound to be speculation in the coming weeks, but at the moment it looks like I will be going back to London," he said.

"Things can always change, but if needs be I will remain at Arsenal next season.

I can confirm there has been no interest from Werder Bremen."

Podolski is set to pick up his 124th cap for Germany against the USA this week and he continues to enjoy the respect of his national team colleagues.

"In my eyes, he is often underrated," said Germany captain Bastian Schweinsteiger

"He's got fewer grey hairs than me and that's probably because he's had more fun in his life than I've had.