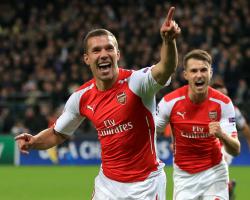 The 30-year-old forward moved to the Emirates three years ago but struggled to hold down a place in Arsene Wenger's side - spending the second part of last season on loan at Inter Milan.

Podolski, who started for the Gunners in the 2014 FA Cup final victory over Hull, has been heavily linked with a move to Galatasaray and his agent Nassim Touihri thinks Wenger has begrudgingly allowed the World Cup winner to leave.

That's why we agreed to make a transfer."

Despite moving to Arsenal with a fine reputation, Podolski's chances became limited as Wenger added the likes of Mesut Ozil, Alexis Sanchez and Danny Welbeck to his forward options.

He also has Theo Walcott, Olivier Giroud and Alex Oxlade-Chamberlain at his disposal - which is the likely reason why the Frenchman could not guarantee Podolski the game-time he craves.

It has so far been a quiet summer on the transfer front with no major departures from the Emirates - although the arrival of goalkeeper Petr Cech from Chelsea has been hailed as a smart piece of business by Wenger.