The North London club gained a solitary point against Manchester United on Monday night at Old Trafford, a notoriously difficult stadium for Arsenal to pick up points. However the Gunners will rue another missed opportunity to gain all three points against a top four rival, whilst also extending the gap between fellow contenders Tottenham and ​Chelsea, who both sit one point behind Unai Emery's team.

Another good win for Arsenal tonight in the #EuropaLeague and a lot to like about the performance. If only this could be translated into our league form. #AFC

On the contrary, ​Arsenal are having no such troubles in the Europa League. They cruised past Belgian side Standard Liege by four goals to nil on Thursday, whilst also winning 3-0 away to a competent Eintracht Frankfurt side on matchday one of the competition. In the Carabao Cup, Arsenal dismantled ​Nottingham Forest, who sit fourth in the Championship, by scoring five goals without reply, with four of those goals coming from players under the age of 21.

With Arsenal's league performances needing inspiration from their displays in Europe, here is how Arsenal should lineup against Bournemouth on Sunday. Bernd Leno (GK) - Since Petr Čech's retirement, the German shot-stopper has undeniably made the number one spot his own with some impressive performances, including a breathtaking double save against rivals Tottenham last season. He will no doubt start on the weekend.

Calum Chambers (RB) - With Héctor Bellerín completing 90 minutes in midweek against Standard Liege, it is hard to picture the Spaniard starting on Sunday. Maitland-Niles is a midfielder by trade, leaving Chambers as the only capable right-back. The Englishman has impressed with performances at centre-back this season, but will have to fill in for Bellerín until after the international break.

Rob Holding (CB) - Holding played the full 90 minutes on Thursday night but in truth had very little to do. The former Bolton man has the composure and solidity that his Brazilian counterpart David Luiz sometimes lacks, and could well feature at the weekend.

Sead Kolašinac (LB) - It's no secret that with the introduction of Kieran Tierney, the Bosnian's days as starting left-back are numbered. After playing 90 minutes against Standard Liege, Sunday's game against Bournemouth comes a little too early for the Scotsman, who must surely start after the international break. Lucas Torreira (CDM) - The 5'5 Uruguayan had a poor game against Manchester United, albeit due to Emery's questionable deployment of the defensive midfielder in an attacking role. However, Torreira excelled when he was moved back into his preferred position on Thursday night, and could return to his natural position against Bournemouth.

Matteo Guendouzi (CM) - The midfield prodigy has been nothing short of outstanding since his 2018 summer move from Lorient, providing Arsenal's midfield with balance and controlled possession. Emery is certainly a fan of the 20-year-old Frenchman, who has started all seven games for Arsenal in the league so far this season.

Mesut Özil (CAM) - Under-appreciated, overlooked and disrespected by Emery, the German World Cup winner has only played 71 minutes for Arsenal in the league this season. The creative outlet Özil offers the Gunners is clear to see and it's a mystery why he is not in the squad more often. Mesut is a game-changing player and given the lack of minutes this season, he has to start at home against ​Bournemouth. 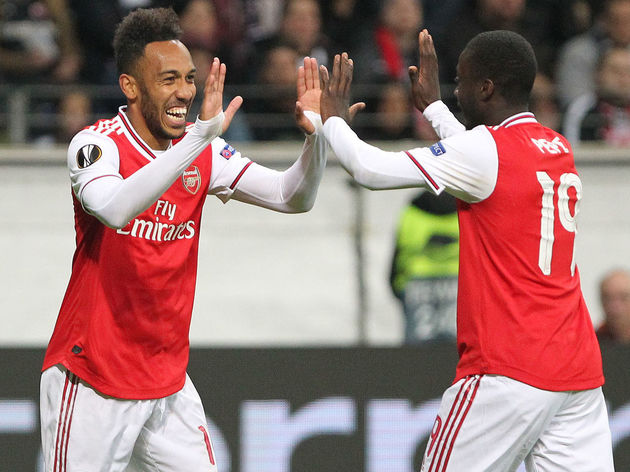 Nicolas Pépé (RW) - The club-record signing hasn't enjoyed the most fruitful of starts to life at Arsenal, managing a single goal and one assist in the league. Confidence is the key here, and a start against Bournemouth could be exactly what Pepe needs to kickstart his Arsenal career. Expect big things to come from the 24-year-old.

Bukayo Saka (LW) - On the contrary, 18-year-old Saka has hit the ground running since his Arsenal debut, scoring once and assisting twice including a deft pass to Aubameyang for the Gabon internationals goal on Monday night. This kid has some future ahead of him, and it seems Emery will deploy him on the left hand flank against Bournemouth on Sunday.

Pierre-Emerick Aubameyang (ST) - In the absence of Alexandre Lacazette, Aubameyang has really stepped up to the plate, scoring seven in seven games this campaign. He is Arsenal's main man and the Gunners would be 12 points worse off without him. Yes, Arsenal have 12 points overall; where would Arsenal be without him?