Pressure mounts on Arsene Wenger after Arsenal capitulate in Munich 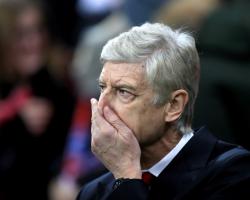 The Frenchman has seen his position as Gunners boss come under fresh scrutiny in recent weeks after back-to-back Premier League defeats damaged his side's title hopes.

That is nothing new for Wenger who has increasingly split supporters in the latter stages of his 20-year tenure, but now some of his ex-players have been questioning his longevity.

Wenger's men were humbled in Munich as Bayern all-but assured themselves a spot in the quarter-finals as Arsenal look set for a seventh successive last-16 exit.

Arsenal were level at the break after Alexis Sanchez cancelled out Arjen Robben's opener but Robert Lewandowski and Thomas Muller scored either side of Thiago's brace as the Gunners were blown away in the second half.

After the game, Wenger and his squad came in for criticism from former favourites Lee Dixon, Martin Keown and Ian Wright

They're not doing themselves justice or him.

"That is the first time where I've seen him where I've thought, 'he thinks it's time'

The fact that he hasn't been able to get a response from the players in the last few weeks might be the final straw."

Keown, who won three league titles under Wenger, suggested this was the nadir of the 67-year-old's reign.

"This is his lowest point ever

Twenty years and Arsene must be considering his future now

Arsenal were bullied, weren't they? Completely.

"The difference between the two squads, they (Bayern) were men against boys, they were bigger and stronger."

Meanwhile Wright, who claimed last week that Wenger had told him he was growing "tired", was tweeting throughout the match and showed his displeasure at the performance.

Wenger himself admitted his side "collapsed" during a second-half spell which saw Bayern score three times in 10 minutes after Arsenal skipper Laurent Koscielny had been forced off through injury.

"It's difficult to explain," he said.

"Just before half-time we had two good chances to score

We came back and played well

In the second half we lost Koscielny very quickly - he came off at 1-1 - and finally we collapsed.

"I felt the third goal was a killer for our players because after that we had no response.

"The real problems were after the third goal

The last 25 minutes was a nightmare for us."

Next up for the Gunners is an FA Cup fifth-round trip to non-league Sutton, with Wenger likely to face further questions about his future when he previews the tie in a press conference scheduled for Friday morning.