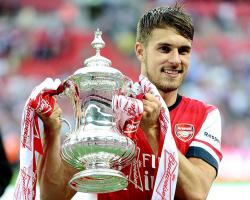 The Wales international struck in extra time to complete a comeback as Arsenal defeated Hull 3-2 to pick up first piece of silverware in nine years.

The Tigers had shocked Wembley as they stormed into a two-goal lead with James Chester and Curtis Davies putting Steve Bruce's side well on top inside the opening eight minutes.

A wonderful Santi Cazorla free-kick halved the deficit before half-time, with Laurent Koscielny's equaliser taking the game into extra time.

Ramsey then took centre-stage as he hit his 16th goal of the season to end Arsenal's near-decade run without a trophy, and the 23-year-old was quick to dedicate the success to Wenger.

"It was mind-blowing," he said when asked about his feelings following the winning goal.

"I have dreamt about this day for many years as a young kid coming through and it hasn't quite sunk in yet.

I think we have deserved it

The manager deserves it as well - he has stuck by his players over the past few years after we were questioned a few times.

"He never had any doubt in us and we believed in ourselves as well and hopefully this will now be the start of many."

Ramsey, who missed almost four months of the season with a thigh injury, felt the first goal in their comeback - scored just nine minutes after Hull had gone two ahead - gave them the incentive to go on and be victorious.

"We knew ourselves that Cazorla's free-kick was important and we always believed we had time to get back into the game," he added.

"You could that they were dropping off a bit but I felt that we were in control and we took advantage of that in the end.

"In the second half of extra time, at 2-2, things are going through your mind about penalties

It was important to try and keep going even though the legs didn't want to and I managed to get into the box and score the winner."

Club captain Thomas Vermaelen lifted the trophy despite not featuring in the game, with Mikel Arteta once again leading the Arsenal side out.

The Spaniard claimed the effort shown to fight back from a poor start spoke volumes for the squad as a whole, and believes the nucleus of the side can now go on and add to their honours.

"We were favourites and we had more pressure than them," he said.

"The way the game started, going 2-0 down after eight minutes, it was a hard one to take psychologically but I think we showed a lot of resilience, composure and mental strength.

"To get through those difficult moments in a good manner and to lift the trophy, I think it is a great platform for the future and this club has got a tremendous future

We have some terrific layers at a young age, with big-game experience."