What do Ole Gunnar Solskjaer and José Mourinho have in common, despite both managing Manchester United to indifferent levels of success? Well, they are both living proof that a formidable playing career doesn't guarantee - nor is it a necessary predecessor to - success in management.

They've each proved that point in their own very different way, and to varying degrees, so have the majority of the current ​Premier League managers.

Of course, there are one or two show-offs who have bucked the trend and had both. Here are the 20 current managers ranked on how their playing careers panned out. Currently flying high in the ​Champions League places with Leicester, having won a multitude of honours with Celtic and taken ​Liverpool to within a whisker of the Premier League title, it's unlikely Rodgers longs for the playing career he never had.

The Northern Irishman showed some promise at Ballymena United and Reading, before a genetic knee issue ended his professional career at 20. Non-league purgatory beckoned for a few years before he hung up his boots and moved into coaching. A decent enough youth player back before the birth of Jesus Christ, Hodgson showed some promise at Crystal Palace, but never managed a senior appearance.

He then disappeared into the non-leagues, resurfacing as a manager at Halmstads BK in Sweden; an emergence that marked the beginning a managerial career that pre-dates the actual sun, but is still somehow ongoing.

This is the earliest José Mourinho picture we have. pic.twitter.com/bxVtOIqPoW

The Special One's super-villain origin story starts in the Portuguese top flight back in 1980, when in a small handful of senior appearances, it quickly became apparent while playing for Rio Ave that he just wasn't good enough.

He quickly plummeted down the leagues and sacked it off in 1987, aged just 24, to focus on coaching instead. Not the worst choice, it has to be said, given the career in the game that followed. On paper, Daniel Farke was a clinical striker, notably hammering in 47 goals in 57 appearances across three spells with the famous SV Lippstadt.08. Unfortunately, those all came in the German fourth tier - the highest level Farke ever played.

Not a career to be sniffed at considering it's more than any of us will ever accomplish, but unfortunately also not enough to place him any higher. You would never have guessed that Chris Wilder - a decent enough right back, who came up through the leagues with Sheffield United before heading off to become a reasonably successful lower league journeyman with the likes of Rotherham, Notts County, and Bradford City - would become Chris Wilder, bona fide tactical genius and actual second coming of the son of God.

But there we have it. He might still be young enough to play for England's Under-21s, but prior to retiring from football and becoming Bournemouth manager for the first time aged just nine in 2008, Eddie Howe had already had a decent playing career.

Prior to taking the hot-seat for the first time, he was in fact already a Bournemouth legend, having made over 250 appearances over two spells with them in the lower leagues, inter-cut with an ill-fated move to Portsmouth in 2002. Despite the common misconception he didn't actually exist prior to taking over ​Aston Villa last season, the impressively forgettable Dean Smith actually had an entire playing career.

It didn't come to much, granted, spending most of his playing days bullying League One strikers with Walsall and the likes, before peaking out with 14 Championship appearances with Sheffield Wednesday in 2002/03. We're really getting into the mid-table 'who's who' of middling English managers now, aren't we? Graham Potter, currently managing *checks notes* Brighton, was at one point in time a promising left back, helping Stoke up through the leagues before being given his Premier League break with Southampton in 1996/97.

That came to absolutely nothing, unfortunately, as he managed just eight top flight appearances before tumbling down the divisions, spending some underwhelming time with West Brom in the Championship and eventually establishing himself with York City in the third division - or League Two, as it's now known.

In many ways, Moyesy's days as a player foreshadowed his managerial career - fitting, then, that he's firmly embedded in the mid-table here. Peaking nice and early with a league title with Celtic, Moyes - a steady central defender - quickly realised he wasn't perhaps as good as once thought, and found his level in the English lower leagues.

He returned to Scotland for a decent spell with Dunfermline in the second tier before settling at Preston North End, where he would make over 150 appearances and eventually move into coaching. 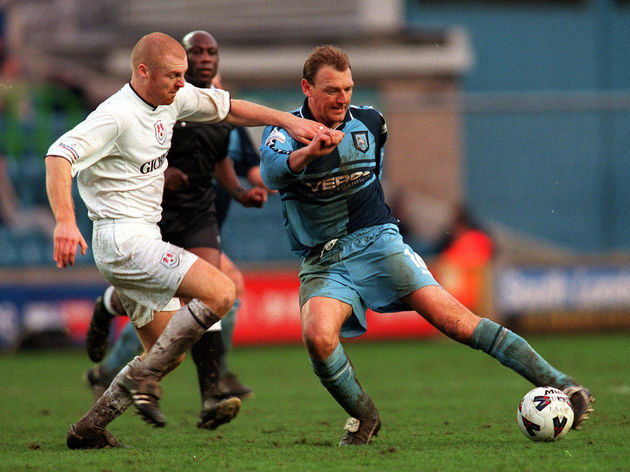 Take a minute to picture the career you think Sean Dyche had as a player. Hold the thought for about ten seconds, then read on.

If you imagined a solid, no-nonsense Championship centre half (let's be honest, you did) then you'd be exactly right! He peaked between 1995 and 2001, with Millwall and latterly Watford, who he would go on to manage. Centre halves make good managers, it seems. Pearson - a feared, respected defender while on the pitch - is perhaps one of the most underrated bosses in the top flight, currently overseeing a stunning turnaround at Watford, having previously laid the groundwork for history at Leicester.

He was perhaps similarly underrated as a player, leading Sheffield Wednesday to League Cup glory in 1991 and later scoring their first ever Premier League goal in 1992.

He wouldn't quite build on that early success, but his later hits would see him twice captain Middlesbrough to promotion to the top flight - not a bad legacy to leave behind at all. Looking at his honours list, it's apparent Nuno Santo was a highly decorated player. A Copa del Rey with Deportivo and four Primeira Liga titles and a Champions League winner's medal with Porto; on that evidence you may have considered him one of the frontrunners here.

And then you realise he did it all as a second-string keeper, making just over 200 senior appearances, most of which coming in his early days as first-choice for Merida and Osasuna.

That takes the shine off things somewhat, but it's not a career to be snuffed at by any means. Ralph Hasenhuttl was a name barely known to non-hipster fans in England prior to joining Southampton last season. In Austria, however, that's a completely different story.

A lethal striker, the big man netted 57 goals in 187 appearances for both Austria Wien and Austria Salzburg, winning himself five Bundesliga titles in the process before a brief stint in Belgium preceded a fateful move to Germany, initially with FC Koln.

He didn't quite hit the goalscoring heights he had previously, finishing off his career with Bayern Munich's reserves before moving into a coaching career that would lead him to RB Leipzig - and subsequently the Premier League. Now we're getting into the big leagues. Having retired as recently as 2016, current Arsenal boss Arteta is a name well-known to virtually everyone with even a passing interest in English football.

Having impressed in Barcelona's youth ranks, he was never quite able to break into the first-team, leading to a move to Rangers that would put him on the radar of Premier League scouts. He left Glasgow for a brief return to Spain before being brought to Merseyside with Everton, where his classy play-making abilities would rapidly endear him to English fans up and down the country.

He would go on to make 359 appearances for the Toffees and before joining Arsenal, scoring 51 goals and cementing his reputation as one of the best midfielders around - even if he never managed a senior cap for Spain. Winning three Premier League titles with Manchester United as a fixture of the great Alex Ferguson teams of the 1990s, Steve Bruce's playing career speaks for itself.

He was named in the team of the decade for the 90s and is fondly remembered as one of the absolute best central defenders of the early days of the Premier League.

His managerial career hasn't quite lived up to that, but the job he is currently doing with Newcastle shows he perhaps doesn't get the credit he deserves. There's a reason Manchester United are currently showing a level of patience towards Solskjaer that no manager since Ferguson has been granted; his previous goalscoring antics put plenty of credit in the Norwegian's bank.

The Baby-Faced Assassin's 126 goals across 366 appearances helped yield six Premier League titles in his 11 seasons in England, as well as two FA Cups and a Champions League for good measure. A career fraught with injury perhaps prevented Ancelotti's career from hitting the heights it could have, but regardless, the time he spent with Roma and Milan remains the envy of many an aspiring Italian midfielder.

A true Rolls Royce in the middle of the park, Ancelotti helped Roma to one of the most successful periods in their history after joining from Parma, winning four Coppas Italia and the 1983 Serie A title - only the second in the club's history. He then went on to become a key part of one of the best ever club sides, joining Paolo Maldini, Ruud Gullit and Marco van Basten at Milan.

There, he won two further Serie As and back-to-back European Cups in 1989 and 1990. He managed a career total of just 338 appearances due to his injury record, but left behind a legacy that would be dwarfed only by one of the most successful managerial careers in history. Another whose days as a manager have left an incredible playing career in the dust, Guardiola's lack of pace and power might have been a problem for other players of his generation, but his intelligence, technical ability and aptitude at reading the game more than compensated and saw him become one of the best central midfield players of his generation.

Deployed largely as a holding midfield player, Guardiola won everything with Barcelona on the field before moving on to win everything off it. He claimed a stunning six La Liga titles, including four in a row between 1990 and 1994.

Injury ravaged a later spell in Italy with Roma and Brescia and he retired after spells in Qatar and Mexico failed to take off - but that's barely a footnote in the grand scheme of things. Three Premier League titles, four FA Cups, two League Cups, two Community Shields, a Champions League and a Europa League. He was the Ballon d'Or runner-up in 2005 and has a list of individual honours almost as long as his goalscoring record.

And that, by the way, is one almost any striker would envy, netting 211 in 648 Chelsea appearances. It remains highly unlikely we'll ever see a midfielder hit the goalscoring heights he did in the Premier League; a genuinely, unbelievably, astonishingly good player who is now proving he has it as a coach.