Nicolas Pepe arrived from Lille for £72m in what was a club-record fee, and was joined through the door by David Luiz, Kieran Tierney and Dani Ceballos on loan from Real Madrid.

Speaking at a fan's forum event on Thursday, Sanllehi said Emery, whose contract expires at the end of this season, should now be able to take Arsenal back to the Champions League with the squad at his disposal. ​Champions Leaguehe said, as quoted by the ​Metro.

Sanllehi was asked about Emery's treatment of ​Mesut Ozil after being dropped from the squad completely in recent games.

The 30-year-old, who is ​Arsenal's highest earner on £350,000 a week, has had limited game time in recent months, making just one Premier League appearance so far this season.

Emery's selection policy, including his treatment of Ozil, was bluntly defended by Sanllehi. “Unai’s policy has always been to play the ones that work hard in training," ​he said.

Emery said after their Europa League victory over Standard Liege last week that Ozil hasn't featured much this season because he believes other players deserved to play more as they were working harder than the German in training.

A number of young players have been given significant minutes this season instead of Ozil, including 18-year-old Bukayo Saka. 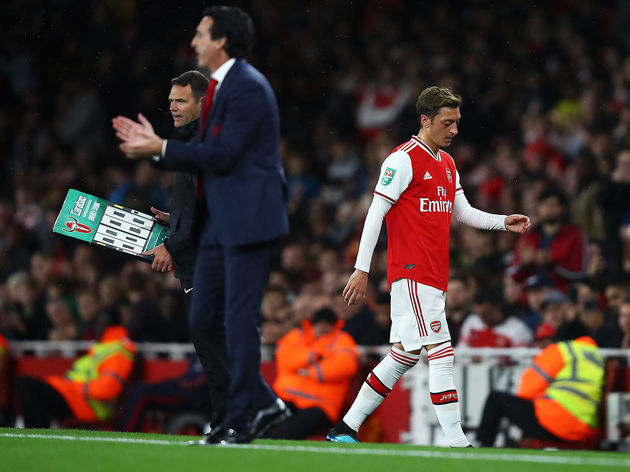 It's been reported that Ozil could leave the club as early as January, but his high wages may cause a problem in any potential move.

The midfielder has been ​linked with a loan move to Fenerbahce in the winter transfer window, but as expected, the Gunners would probably have to subsidise some of his salary.